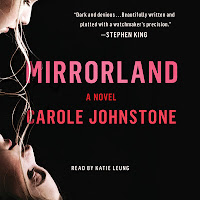 Oh my gosh - Carole Johnstone's debut novel Mirrorland is simply amazing! It's easily one of the best books of the year for me.
Cat and El are identical twins - mirror twins as their mom says. They grew up  in a large rambling house at 36 Westeryk Road with their mother and grandfather. They were homeschooled and had vivid imaginations, inventing a world called Mirrorland - full of pirates witches, clowns, cowboys and more. But they grew up - and Cat left Scotland and El behind for twelve years. The only thing that brought her back was the news that El was missing.....
Where to start? At the house at 36 Westeryk Road of course. When Cat returns it's as if time stood still. Johnstone's descriptions of the house and the rooms within gave me the shivers. The girls named the rooms as well - who's not worried about a room called The Clown Café? Or the world that waits underneath the pantry stairs? The whole overall feel is very Gothic. (Yay! I love Gothic)
Johnstone's plotting is fabulous. Mirrorland is told from Cat's point of view, past and present. Are Cat's memories of their childhood accurate? And I know it sounds outlandish - but could Mirrorland be real? The possibility is definitely there. Is El really missing or is this another fantastical game? Johnstone's writing kept me on the edge of my seat as I tried to parse out what was real, what happened years ago and what is happening now.
I chose to listen to Mirrorland. I often say that I become more immersed in a book when I listen instead of reading. And this was most definitely one of those times. The narrator was Katie Leung and she was a great choice. I loved her Scottish accent - it gives the narration movement. Her voice is clear and easy to understand and her reading pace is just right. She interprets Johnstone's work very well and uses her voice effectively to bring the story alive.
A psychological thriller, a crime tale mixed with a dose of fantasy. Excellent for this reader! If this was Johnstone's debut - I can't wait to read what she writes next.
Posted by Luanne at 8:00 AM

Email ThisBlogThis!Share to TwitterShare to FacebookShare to Pinterest
Labels: one of the best of 2021 by far, Simon and Schuster amazing!

Thank you for a review on an intriguing story.

Thanks Mystica for stopping by. I've read other reviews now that I've posted mine - and it looks like you either like it or hate it. I loved it!

Thank you so much, Luanne! What an amazing review! I’m so glad you enjoyed Mirrorland! All best wishes, Carole xx