When We Were Vikings - Andrew David MacDonald 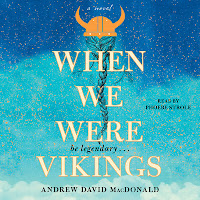 I was intrigued by the publisher's description of Andrew David MacDonald's debut novel, When We Were Vikings.

"A heart-swelling debut for fans of The Silver Linings Playbook and The Curious Incident of the Dog in the Night-Time." And yes, that descriptor is spot on!

Twenty one year old Zelda is a Viking enthusiast. She also has Fetal Alcohol Syndrome. She is high functioning, but her view of the world is seen through a different set of eyes. Zelda lives with her brother Gert. They've agreed to a set of rules that is posted in their apartment. But, money is tight and when Zelda suspects that Gert is operating outside the rules, she sets herself a quest."...Zelda finds herself in a battle that tests the reach of her heroism, her love for her brother, and the depth of her Viking strength."

Oh, where to start? Zelda is such a wonderfully drawn lead character. The reader can't help but be on her side, urging her forward, fearing for her safety and discovering what we might take for granted, as she also navigates her own coming of age. The supporting cast is just as wonderful - her brother's girlfriend AK47 is a calming influence, her therapist is the voice of reason, her boyfriend Marxy and the rest of the gang at the community center are inclusive and without guile. Gert is a complex character and I appreciate his struggles as he tries so hard to raise himself and Zelda. The 'villains'? Yes, you will love to hate them.

I love that MacDonald kept things 'real' with Zelda. She sees Viking lore and values as a guide for living, but she's still a young woman exploring her sexuality, the meaning of love, the responsibility of family, finding a place for herself and so much more.

When We Were Vikings was an unexpected, captivating, heart string tugging (and nail biting in some spots!) tale. I can't wait to read what MacDonald writes next.

I chose to listen to When Were Vikings. The reader was Phoebe Strole. Her voice was perfect for Zelda. She has a younger tone of voice and it absolutely matched the mental image I had created for Zelda. She also captures Zelda's personality and outlook with her intonation, speed, volume and emphasis. Voices used for the rest of the cast were just as well done. Strole speaks clearly and is very easy to understand. I've said it before and I'll say it again - listening to a book immerses me in the story. And in the case of When We Were Vikings, I know that I enjoyed listening to Zelda's story so much more than I would have by reading. (But either way, you're going to love it!)Listen for yourself - here's an audio excerpt of When We Were Vikings.

And remember - "We are all legends of our own making." Absolutely recommended.
Posted by Luanne at 7:00 AM

I look forward to hearing your thoughts. Most definitely a great listen. And AK47 is AKA Annie!

This isn't a book I'd usually read, but after seeing your review I might need to get this one on audible.

Let me know what you think Dianna.