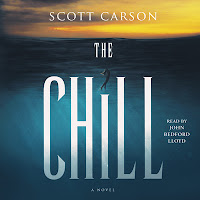 Michael Connelly and Stephen King provided glowing blurbs for Scott Carson's newest novel, The Chill. Both are favorite authors of mine, so I definitely wanted to have a listen!

The premise intrigued me, the idea of a lost town under water. In order to bring water to New York, Galesburg, a town that had existed for centuries was flooded seventy five years ago. The residents were not happy of course - then or now. Because, you see, there are ghosts still in the tunnels, working away until they have their revenge. And there are descendants of those lost souls still alive, that are aware of their plans....

The Chill is a character driven novel. I enjoyed the many details of each of the player's lives, especially the two leads, Aaron and Gillian. Carson gives them personalities and emotions that were believable.

Carson did loads of research for this book - there are many details about dams, sluices, reservoirs and how they are maintained and run. Initially I found this interesting, but as the book progressed, it grew a bit boring and repetitive. (But it did make me think about our use of and need for fresh water) I wanted more about the underwater entities. We do meet the 'leader', but I still wanted more interaction. The Chill is billed as a horror novel - and I wanted chills running and up and down my spine. I did, but not as much as I had hoped. Maybe part of it was because I didn't really 'get' how the underwater inhabitants were going to get revenge on New York City. They're busy digging to finish a tunnel. But what then? Flood? Cut off? Poisoned? I found it hard to buy into the 'dying to dig a tunnel' aspect as well.

Now, that being said, I did like the book. I like Carson's writing. And I was entertained by this tale. I do feel it could have been shortened up a bit and still told the same story. I would like to see Aaron again - I think he has unplumbed depths to explore. Pun intended ;0)

I did choose to listen to The Chill. The reader was John Bedford Lloyd. And he was a great choice. He has such a rich, resonant voice. He has a measured way of speaking that lets you appreciate every word and phrase. It's pleasant to listen to, well enunciated and easy to understand. I think his voice suited this book and the genre. Hear for yourself - here's an audio excerpt of The Chill.

(And while looking for Carson's website, I made an interesting discovery - Carson is the pseudonym for an author I quite enjoy...."Scott Carson is going to handle the supernatural stories for me.")
Posted by Luanne at 7:00 AM

I love a good ghost story, but would abandon this one if it dragged on too long.