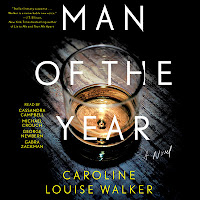 Man of the Year is Caroline Louise Walker's debut novel.

Dr. Robert Hart has it all - his practice is doing well, beautiful home in Sag Harbor, a boat in the marina, a gorgeous younger wife - and he's just been named man of the year. His son Jonah was struggling but his college roomate Nick seems to have helped him find his way. So when his wife asks Nick to spend the summer with them, he can't say no. Nick can have the guest cottage of course.

But how Robert envisioned the summer doesn't seem to be quite what's happening. He's sure that Nick is hitting on his wife - and that she is welcoming his advances. And so, the good doctor decides to (subtly) confirm and correct this issue. And so he lies. (about what I'm not going to say as I don't want to provide a spoiler) And that one lie leads to another - and another and .....

The first half of the book is told through the good doctor's voice. He is most definitely an unlikable character. He's the definition of supercilious - arrogant, smug and more. In the second half of the book, the supporting players are given a voice. Now, I'd like to say that they were the opposite of Robert, but they weren't. There was just something off about all of them. And I found all of them unlikable as well. Kudos to Walker for her characterizations.

Walker does a wonderful job manipulating the reader's perceptions along the way to a wonderful last gotcha. Do we believe Robert's view of what's happening? Are the supporting players telling the truth? The unraveling of Bobby Hart is an accident you can't help but rubberneck.

I chose to listen to Man of the Year. The lead role was voiced by George Newbern, one of my favourite narrators. He has a wonderfully expressive voice that perfectly suited my mental image of this character. Disdainful and condescending. He has interpreted the role perfectly. I really enjoy a full cast of readers rather than just one. Man of the Year employed three other readers to tell this tale -  Cassandra Campbell, Michael Crouch and Gabra Zackman. Again, the voices matched the script. Softer for the wife and office assistant and younger, more innocent voices for Jonah and Nick. I've said it before and I'll say it again - I find I become so much more immersed in a story when I listen. Here's  an audio excerpt of Man of the Year.

Walker is a talented writer and I will be curious to see what she pens next. Read an excerpt of Man of the Year.
Posted by Luanne at 7:00 AM

Really enjoyed listening to the audio Luanne. You’re right, he has a terrific voice. I’m not a fan of unlikable characters so won’t read the physical book but might listen to the audiobook just to hear the narration:-)
Cheers!

A good reader is a must - I've started watching for names I know - and avoiding others.

Thanks for the review. Sounds a good one despite the unlikable characters.

I seem to be reading a lot of books lately with unlikable characters Mystica!