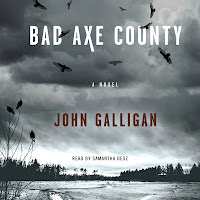 Bad Axe County is John Galligan's latest novel. If you're a 'grit-lit' fan, you're going to enjoy this one.

Heidi Kick is a former Wisconsin Dairy Queen. She's also the interim Sheriff for Bad Axe County. There are many who don't want her to have the job permanently - including others on the force, drug dealers, corrupt local government and a whole bunch of other lowlifes. She does have some supporters though. And she's going to need all the help she can get.....

I couldn't help but think bad a** as I got to know the lead character. She's tough, smart, determined to clean up the town and solve the mystery of her own parents' murder. All while trying to juggle being a wife and mother as well. Heidi is the main voice in the book, but we also hear from some of the antagonists - each one of them perfectly skin-crawling despicable. And one victim, determined to save herself. I have to say, her chapters were really hard to listen to.

Galligan's descriptions are very atmospheric - I could easily picture the settings. And I doubt I would stop in Bad Axe County - it just says 'keep on driving' to me. The winter storm and flood only serve to isolate the county.

The plotting was good as well, with the pieces falling into place with each new chapter and revelation. The reader is privy to more information than the Sheriff and can only hope she puts the pieces together before it's too late.

I chose to listen to Bad Axe County. The reader was Samantha Desz - and her voice was perfect for this character. It has a nice gravelly tone, is easy to understand and completely matched the mental image I had created for Heidi. She rarely raises her voice which is right for this character. The calm way of speaking belies her determination. It's well paced, never rushing and perfectly modulated. The voices employed for other characters are really good as well. Listen to an excerpt of Bad Axe County.

I hope there's another book in the works with the Dairy Queen. I think they are more stories to be told.  Fans of Fargo (indeed, one of the really nasty guys has 'that' way of talking), Justified or Ace Atkin's Quinn Colsen novels would enjoy Bad Axe County. Gentle readers, this one is probably not for you - there are graphic sexual and abuse situations.
Posted by Luanne at 7:00 AM

Just the name "Bad Axe County" would keep me moving along.

Sounds interesting! We have a Bad Axe (town) in the state I live in! (not wisconsin)

Bermudaonion - uh huh, the tourism board might have a hard time selling that....

Many Thoughts - I bet there's a neat story behind the name...