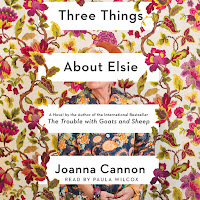 Three Things About Elsie is the newly released second book from Joanna Cannon.

"There are three things you should know about Elsie. The first thing is that she’s my best friend. The second is that she always knows what to say to make me feel better. And the third thing…might take a bit more explaining."

And so begins the story of a life, a friendship and a secret told by eighty-four-year-old Florence. Florence lives in the Cherry Tree Home for the Elderly and has fallen. As she awaits rescue, she worries about that secret finally coming to light.

Oh my - prepare to have a tissue (or two or three) handy. Three Things About Elsie is a moving, powerful, heartbreaking, heartwarming listen. It's about friendship, growing older, the foibles of memory and a life well lived. All of that is surrounded by the mystery of the new resident at the care home. Could he really be the man from Flo and Elsie's past?

I adored Florence's voice, her outlook on life and her sense of humour. Supporting players Elsie and Jack were also brilliantly drawn. Two employees of the home were also given a voice. Their humaneness belied the 'Nurse Ratchet' mindset I was afraid I would find.

I chose to listen to Three Things About Elsie. Listening always immerses me in a story, making it more 'real'. The reader was Paula Wilcox and she was wonderful. Her voice matched the mental image I had for Flo. Her accent was perfect, easy to listen to and easily understood. And yes, her voice seemed to belong to a senior. She interpreted Cannon's characters and story very well. Listen to an excerpt of Three Things About Elsie.

Cannon is a psychiatrist and has an 'interest in people on the fringes of society.' Her writing benefits greatly from these interests. Flo's narrative is full of keen observations, ruminations and truths. I do have to say I cried each time Flo imagined what her rescue would be like and who would come. And those final pages.......
Posted by Luanne at 7:00 AM

I'm not familiar with that author or book but it sounds wonderful to me.

Bermudaonion and Mystica - I hadn't heard of it either. It's always a treat to find an author new to you - and even more when the book really resonates with you.

After reading her Goats & Sheep novel, she went straight to my must read list. I loved it. That was my pick of the year for the best book I read. As soon this book was released, i ran to my local bookstore & picked up a copy. She cannot write fast enough for me!
So glad you enjoyed the audiobook Luanne. It sounds wonderful. Hmmm........wonder what G & S would sound like in audio format :-)