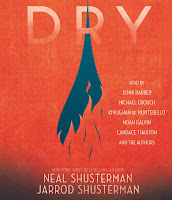 I'm a bit of a insomniac and often to listen to audiobooks at night. I eventually drift off and sometimes have to backtrack the next night to see what I missed. But this wasn't the case with Dry  by Neal Shusterman and Jarrod Shusterman. It was so good, I just couldn't stop listening!

California's drought issues are ongoing and worsening - until the day of  the Tap-Out. The day the water is completely shut off, stores are stripped of water and thirst drives people to unthinkable choices.

Teen Alyssa, her younger brother Garrett and her teenaged prepper  neighbor Kelton are at the heart of the narrative. Two others - Jacquie and Henry become part of the story as well.

The first thing I thought to myself was this was not a far fetched premise at all. The Shusterman's imagining of what might transpire if the water disappeared was completely believable - and frightening real. Anarchy.

Each of the five characters is given a voice through their own chapters and outlooks. Each player has a different take on how to survive this catastrophe. What choices will they make? As a group? As individuals? What would you do?

The decision to record this audiobook with an ensemble cast of five narrators was brilliant. Each voice completely matched the character they were reading. Alyssa, (Jenni Barber) is the voice of reason, more disposed to consider society than the individual. But as things go from bad to worse, she is forced to make some terrible decisions. Garrett, (Kivlighan De Montebello) is young, frightened and innocent of what this shortage will mean. Kelton, (Noah Galvin) I quite liked - pragmatic on the outside, paddling hard on the inside. Henry, (Michael Crouch) oh Henry. As my Gran used to say - he's a piece of work and his inner dialogue and actions made me so angry. And then there's Jacqui (Candice Thaxton). She's tough, smart and a survivor. I have to say, she ended up being my favourite character. Each voice was clear, easy to understand and absolutely matched the character they were playing. Listen to an excerpt of Dry.

A few times, I said to myself - 'why don't you....?' But then I reminded myself that these were teens.

Bottom line - loved it! Honestly, I wanted more. But as the credits rolled, I thought hey, this would make a great movie. Turns out Paramount Pictures thought the same thing. And I also thought - I better pick up a few cases of water - you know - just to have on hand......
Posted by Luanne at 7:00 AM

I read this last weekend. It is such a believable plot that could occur this year. I've recommended it to several people who normally don't read YA books.

This will probably come true before we know it. I love ensemble casts!

Stacy - it could so easily happen! It was so good!

Bermudaonion - yes I think so too. The ensemble cast was fantastic.

And sometimes you have water, but it can't be for drinking - Austin is under a 'boil water' restriction right now - first time ever. There has been a lot of rain here and the dam system on the river has been implemented to open floodgates. Naturally a lot of mud and sediment has been stirred up. The Austin water treatment plants have not been able to keep up because they have to clean their filters so often. This is day 2 and it might as well be the 'end of life' in this big city. Happily, I live outside of Austin and we get our water in a different way. However, our daughter and son-in-law have been dealing with this.

This book seems very appropriate in some ways. Don't think I'll suggest it to my girl right now though - ha! I'll put it on my list.

This sounds really good and I love that each character has their own narrator.

Kay, no I don't think it would be a book to recommend to your daughter right now! I get my water a different way as well. There have been more than a few boil water advisories up here as well.

Vicki - I think I enjoyed it so much more by listening that I would have reading.