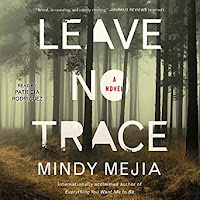 I enjoyed Mindy Mejia's last book and happily picked up her latest, Leave No Trace.

Lucas Blackthorne was nine when he and his father walked into the wilderness of Minnesota and never returned. Ten years later Lucas is found ransacking a store and is taken into custody. He doesn't or won't speak and refuses to communicate in any way, so he is admitted to a psychiatric facility. Where has he been? What has happened to him? Where is his father? Maya Stark is an assistant language therapist who begins to work with Lucas to find answers. Maya herself has a troubled past. (Which had me wondering how she could be working in a psychiatric facility.)

Okay, let me mention again that Lucas is 19 and Maya is 23. Uh huh - you see what I'm pointing at? The attraction is there between the two and only grows as the book progresses. Mejia does a good job at ramping up the suspense. But, I have pragmatic tendencies......and I found some of the plot developments a bit far fetched and frankly unbelievable. (Seriously, an assistant speech therapist doing what she's doing? Sorry, trying not to provide spoilers.) Now, that being said, I did finish the book as I really wanted to know the final answers as to where Lucas has been.

But, in the end, I felt like I had listened to a YA novel. Which I do really like. But that isn't what I was expecting when I started Leave No Trace. It was the billing of a "riveting and suspenseful thriller" that initially caught my attention.

Much of that YA feeling was down to Maya. Leave No Trace is told in first person through her viewpoint. And unfortunately - I didn't like her or didn't feel a great deal of sympathy or empathy for her. For me she came across as unprofessional, irresponsible, impetuous and juvenile.

I chose to listen to this latest book. I find listening to a book immerses me more fully in the story. The reader was Patricia Rodriguez and she was excellent. She had a voice that matched the age, demeanor and mental image I had imagined for the the lead character. Her voice is quite expressive and captures the tone of the plot and action very well. Listen to an audio excerpt of Leave No Trace.

So, great narrator, but only a so-so listen for me. I'm in the minority on this one I think - check out the positive reviews on Goodreads.
Posted by Luanne at 7:00 AM

I'm pretty sure I'll pass on this one. I'm just about burned out on these types of thrillers and feel like I need a break unless a book is stellar. And so many don't seem to be. Good to know that the audio was well done.

An audiobook with a good reader is always a delight, but very disappointing if the story itself isn’t what you were expecting. I’m not a fan of implausible thrillers. They leave me feeling like I wasted my time, so i’ll give this one a pass. Thanks so much for the super review Luanne!

Kay, I hear you - I've been devouring these for a few years now and yes, it has to be darn good at this point.

I liked this book pretty well, but those blurred patient-doctor lines bothered me a lot.

Dianna - they were pretty much non existent!