Us Against You- Fredrik Backman 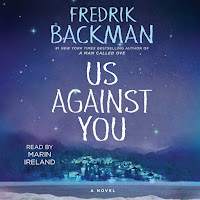 I am a huge fan of Fredrik Backman's books. His last, Beartown, was superb. (my review) I was thrilled when I found out there was a sequel - Us Against You. I wanted to know what happened next.....

Us Against You picks up where Beartown left off. After an unthinkable crime, can the hockey mad Beartown ever pick up the pieces? Their team is disbanded, their funding non existent, they have no coach and there are cracks in the town's support system. An unnamed narrator again guides us through the months after that event.

The basis of Us Against You is hockey, but it's the story of the players, their supporters and their plans, hopes, dreams and schemes. And it is this exploration that has made these two novels five star reads for me. The cast is large and diverse, with the young players affecting me the most. Their stories are poignant and so well written.

But it is also about hockey and how that desire to win and conquer rivals can also lead down some disturbing paths. (And really, it's not that far from the truth)

"In many years’ time we may not know what to call this story. We will say it was a story about violence. About hate. About conflict and difference and communities that tore themselves apart. But that won’t be true, at least not entirely. It’s also a different sort of story." And just like Beartown, it's a helluva story.

I chose to listen to this latest. The reader was Marin Ireland, a narrator I have previously enjoyed. She's chosen a voice that suits the unnamed narrator - the almost dispassionate tone of an observer, not a player. This was quite effective, lending more weight to the words themselves. That's not to say there isn't any movement to her voice - there is. She articulates well and her voice is pleasant to listen to. Listen to an excerpt of Us Against You.

Us Against You is storytelling at its finest. Absolutely recommended listening or reading, but make sure to read Beartown first.
Posted by Luanne at 7:00 AM

I've got A Man Called Ove on my shelf waiting for the perfect moment to read it. I've heard nothing but great things about this author!

Ethan, you're going to love his writing. I really liked A Man Called Ove, but my heart is with Britt-Marie Was Here.