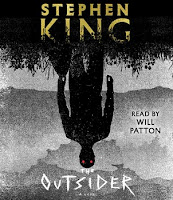 I enjoy Stephen King's chunkster books. With his last few, I've started to listen to them instead of reading. And I've found that I actually prefer the audio version - I feel more immersed in the story.

King's latest is The Outsider. (creepy cover eh?) The Outsider does open with a horrible crime - an eleven year old boy is found dead and violated. Fingerprints and forensic evidence firmly point to the guilty part - his baseball coach. But Terry Maitland has an alibi, a seemingly airtight alibi. How could he be in two places at once? And there's the opening for another creepy King-esque twisty plot. A plot that veers into darkness. But is that darkness supernatural or could it be from the natural world? King keeps the listener guessing with a slow eking out of the case and its resolution. King fans will be happy to see the return of Holly Gibney in The Outsider. I always enjoy the large cast of characters and the detailed descriptions that earmark King's work.

The reader was Will Patton - one of my hands down favourite audio book narrators. He has a voice that is so versatile - from soft, dulcet tones to harsh, sharp tones and everything in between. One of the things I do enjoy about King novels is the large cast of characters. Patton had a voice and style for everyone of them. It was easy to identify who was talking in a conversation. This variance and versatility make the story come alive. It also keeps the listener engaged. Easy to understand, well enunciated as well. Listen to an excerpt of The Outsider.

King's style has evolved from the early days, but bottom line - no one spins a tale like Stephen King.
Posted by Luanne at 7:00 AM

I read that King loves audio books and has a big say in who narrates his - I think that's why they're always well done. I might have to give this book a try.

A narrator can make or break a book - Patton is excellent. That's a neat fact about King having a say in his books. Makes sense!