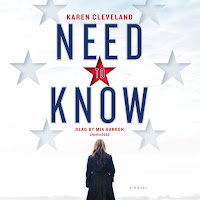 I initially passed over Karen Cleveland's debut novel, Need to Know. I saw the phrase "CIA counterintelligence analyst." I'm not a fan of espionage/spy novels. But, I kept reading great reviews and realized the premise wasn't quite what I had imagined.

Vivian Miller is an analyst working on finding Russian sleeper agents in the US. She's hacked her way into a Russian handler's computer. And what she finds stuns her - a photo of her husband Matt. What will she do? Turn him in? Protect him? After all they have four children together.

Cleveland has penned a fast paced thriller, one that moves forward very quickly with each development. Along the way, the reader's assumptions and deductions will change with each new twist Cleveland adds.

The focus of Need to Know is not so much about the espionage - in fact I questioned whether Viv could have actually gotten away with some of the things she does.  But, then I discovered that Cleveland was herself a CIA analyst, so I will defer to her inside knowledge. Need to Know instead focuses more on the choices Vivian has to make and what she will do to protect her family - especially her children.

I chose to listen to Need to Know. The reader was Mia Barron. She was a good choice. Her voice is clear and concise. Her voice 'moves', conveying the emotion and action of the story easily.  Listen to an excerpt.

"Charlize Theron will produce and star in the spy thriller “Need to Know” for Universal Pictures."
Posted by Luanne at 7:00 AM

I think you liked this one better than I did. There were good parts, but I got so frustrated with the main character. I did like the audio, but her thoughts were annoying. Perhaps I will come to like it better or perhaps I should have just moved it to the DNF pile. However, I will try the author's next book. Ha!

I enjoyed it, not so much for the details of the job and whether or not she could have pulled off what she did but for the unrelenting suspense and fear she would get caught and not being able to make up my mind about who was telling the truth and who wasn't.

Kay - I think listening was better than reading it would have been for me. Yes, it was a bit overwrought, but was entertaining for the drive to work and back.

Grandma Cootie - yes the suspense was constant and who I thought was telling the truth changed rapidly. The ending was a good twist.