I'll Be Gone in the Dark - Michelle McNamara 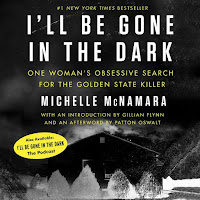 I love a good, fictional murder mystery and rarely read true crime. But I was eager to read I'll Be Gone in the Dark by Michelle McNamara. It was the subtitle that grabbed me: "One Woman's Obsessive Search for the Golden State Killer."

McNamara was a journalist and the founder of TrueCrimeDiary.com. I say was, as she passed away before her book was published.

Michelle's instincts and drive for answers led her to delve deeply into the decades old case of a serial rapist and murderer who terrorized California for over the course of ten years.

It was truly fascinating to see the timeline, clues and hypothesis she built from her painstaking search.  McNamara pursued the tiniest of leads, coming up with connections that kept moving her forward. Her investigative skills were truly impressive. And along with fascinating, I'll Be Gone in the Dark is just as frightening. Definitely don't listen to this at night. Alone. By yourself.

The timeline of the book does jump around - keep an eye or an ear on the heading for each chapter. Despite that, it's not a problem to follow the story at all - it makes for riveting reading or listening.

I did choose to listen. Gabra Zackman was the narrator. She has a clean, crisp, no nonsense voice that matched the mental image I had for the author. Her inflection captures the tone and tenor of the content. An 'easy to to listen to' narrator that did a great job interpreting a not so easy narrative. Listen to an excerpt of I'll Be Gone in the Dark.

Gillian Flynn provides a great introduction to the book. And the title? "He pointed a knife at her and issued a chilling warning: "Make one move and you'll be silent forever and I'll be gone in the dark."

(Gentle readers, this is not the book for you -  the cases are somewhat graphic in their detail.)
Posted by Luanne at 7:00 AM

This book is graphic but it wasn't my favorite true crime book. It felt unfinished to me.

I have never read much true crime. Guess I prefer mine in the fictional realm. However, I have heard some good things about this one so it's possible I'll try it. Probably as an audiobook.

Bermudaonion - I think the fact that it was finished by two others that may have added to that feel. That and the murderer is still at large.


Kay - Yes, that is my preference as well. I don't think I would have enjoyed it in print format as much.