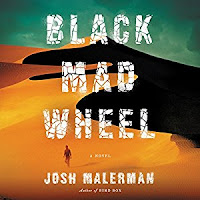 Josh Malerman's first book, Bird Box, was one of the best audio books I've ever listened to. I was eager to see what his newest book, Black Mad Wheel, would bring.

In Bird Box, it was sight, seeing and not seeing, that was at the heart of the terror. This time around, Malerman brings hearing and sound as the focal point of the plot.

1957. A group of musicians, all part of the band The Danes, as well as being former soldiers, are drafted by the US government to hunt down the source of a sound. A sound that by all descriptions will drive a person mad. They agree (the money they're offered seals the deal) and head to Africa. Former expeditions have defined an area that is believed to be at the heart of the sound. Those expedition members are dead.....

The narrative goes from past to present so there is another point of view - that of a nurse called Ellen. She is responsible for only one patient in the government facility she works in - that of a sound survivor - Phillip Tonka of The Danes. While most of the book surrounds Phillip, I found the character I liked the most was Ellen.

I liked the idea of a sound as a weapon or evil. And Malerman's enigmatic depiction of the sound is definitely scary. But for this listener Black Mad Wheel just never met my expectations. Which admittedly were very high as I adored Bird Box. I thought the enlisting of musicians, albeit ex soldiers, a bit of a stretch.  For me,  the 'horror' elements of this latest were just too... hmm...too something that I just can't define. Maybe amorphous is the word I'm looking for - the evil was just too vague for me. Malerman's latest work has been referred to as metaphysical by other reviewers.

Black Mad Wheel's scenes and characters do benefit from Malerman's musical and band life. He is the lead singer of the band The High Strung.

I chose to listen to Black Mad Wheel. The narrator was Robertson Dean. He has a rich, full voice with a nice low, mellow undertone. It's pleasant to listen to and the low tone and measured delivery fits the story well. He uses different tones and tenors to represent different characters. Listen to an excerpt. Or if you prefer, read an excerpt.