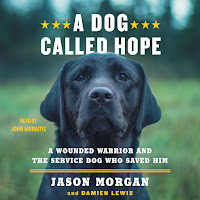 A Dog Called Hope:A Wounded Warrior and the Service Dog Who Saved Him  is the story of Jason Morgan. and his service dog Napal.

Morgan was a Combat Meteorologist with a Special Forces unit when a covert mission went awry and he suffered catastrophic injuries. Morgan was declared a paraplegic. Fighting unbelievable pain both physically and mentally, Morgan seized upon a ray of hope - Canine Companions for Independence. CCI provides service dogs free of charge to those in need.

A Dog Called Hope is Morgan's life story after that horrific accident - and the dog named Napal, who changed Jason's life.

Although we know accidents happen like this all the time, it is hard to listen to someone's personal story - the pain, the anguish and the grief. But I knew that Morgan had an important and uplifting message to impart. As a dog lover, I was already invested in this story simply from looking at the warm, wonderful and somehow wise face of Napal on the cover of the book. The journey through his accident, to CCI and Napal and afterwards is fascinating, uplifting and yes tear-jerking. (You're going to need a tissue for a few chapters) Morgan has made it his life's work now to spread the word about CCI and the service dogs they train. He now spreads that word as a motivational speaker.

I chose to listen to Morgan's story - the reader was John Moraitis. His voice fit the story of this soldier. He has a matter of fact, get on with life tone that suits this soldier's story. His enunciation is crisp, clean and easy to listen to and understand. I often find that listening to a book is much more intimate than reading - the listener becomes part of the story. And what a story this was! Listen to an excerpt of A Dog Called Hope. Or if you prefer, read an excerpt.

Damien Lewis is an author who worked with Morgan on this book - and indeed plays a part in Napal's story.

While I found the writing slightly overly dramatic in spots, how can you give anyone's life story anything but a five?
Posted by Luanne at 7:00 AM

He does, doesn't he Mystica?!