The Wrong Side of Goodbye - Michael Connelly 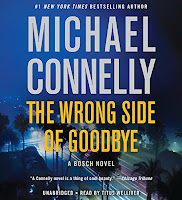 The Wrong Side of Goodbye is the twenty first novel in Michael Connelly's Harry Bosch series.

I wondered where Connelly was going to take Harry once he left the LAPD. But once a cop, always a cop. Harry has joined the small San Fernando PD as a reserve officer. He's been working the case of The Screencutter, a serial rapist working in the area. Harry is also a private investigator now and is called to the home of a reclusive billionaire. At death's doorway, the man wants to know if he has any blood heirs. But there are those just as determined to see that none are found.

Connelly has come up with two great cases, both intriguing and well plotted. We meet a whole new set of characters in the new police department. I would definitely like to see more of this group and this setting. Mickey Haller (The Lincoln Lawyer) makes an appearance as well. I quite enjoy the two characters appearing in each other's cases.

This is the 21st entry, but this series has never lost it's momentum or freshness. Skillful storytelling, great characters, inventive plotting, excellent detective work and so entertaining.

The Wrong Side of Goodbye was a fantastic listen - here's an audio excerpt. Narrator Titus Welliver has become the voice of Bosch for me - gruff, growly, tough. His interpretation of the character absolutely matches my mental image. And he also stars in the television series Bosch. Or read an excerpt here.
Posted by Luanne at 7:00 AM

I haven't read any Connelly in a while but his books are always a treat.