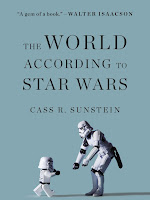 What books caught my eye this week as they passed over the library counter and under my scanner. This week it's all about light beacons...or light sabres....

First up is The World According to Star Wars by Cass R. Sunstein.

"There’s Santa Claus, Shakespeare, Mickey Mouse, the Bible, and then there’s Star Wars. Nothing quite compares to sitting down with a young child and hearing the sound of John Williams’s score as those beloved golden letters fill the screen. In this fun, erudite, and often moving book, Cass R. Sunstein explores the lessons of Star Wars as they relate to childhood, fathers, the Dark Side, rebellion, and redemption. As it turns out, Star Wars also has a lot to teach us about constitutional law, economics, and political uprisings.

In rich detail, Sunstein tells the story of the films’ wildly unanticipated success and explores why some things succeed while others fail. Ultimately, Sunstein argues, Star Wars is about freedom of choice and our never-ending ability to make the right decision when the chips are down. Written with buoyant prose and considerable heart, The World According to Star Wars shines a bright new light on the most beloved story of our time."

Next up is Brilliant Beacons: A History of the American Lighthouse by Eric Jay Dolin.

"In a work rich in maritime lore and brimming with original historical detail, Eric Jay Dolin, the best-selling author of Leviathan, presents an epic history of American lighthouses, telling the story of America through the prism of its beloved coastal sentinels.

Set against the backdrop of an expanding nation, Brilliant Beacons traces the evolution of America's lighthouse system from its earliest days, highlighting the political, military, and technological battles fought to illuminate the nation's hardscrabble coastlines. Beginning with "Boston Light," America’s first lighthouse, Dolin shows how the story of America, from colony to regional backwater, to fledging nation, and eventually to global industrial power, can be illustrated through its lighthouses.

In the modern world of GPS and satellite-monitored shipping lanes, Brilliant Beacons forms a poignant elegy for the bygone days of the lighthouse, a symbol of American ingenuity that served as both a warning and a sign of hope for generations of mariners; and it also shows how these sentinels have endured, retaining their vibrancy to the present day. Containing over 150 photographs and illustrations, Brilliant Beacons vividly reframes America's history."

Thanks for picking up my book. Hope you like it. Seeing that you live in Canada, you might also enjoy my book on the fur trade. All the best, Eric Jay Dolin