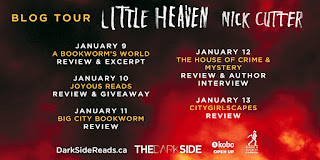 Nick Cutter is a pseudonym for a Canadian author who has written some lovely memoirs that I've enjoyed. And then there's the opposite side of the coin. Cutter writes some scary sh...um stuff. (To this day if I think about The Troop I get all squeamish.) The squeam factor his latest, Little Heaven, is even greater.

The premise? In 1965 three guns for hire band together (instead of killing each other) to rescue a boy from a religious cult (echoes of Jonestown) deep in the woods of New Mexico. What awaits them is much darker and devilish that expected. We know they survive (but not unscathed) and fifteen years later they are called upon again to return to the site of Little Heaven.

Cutter flips the narrative from past to present, as the reader slowly begins to understand what was faced in 1965 and what they are marching back into in 1980. Although the book has specific time frames attached to it, I felt like the story was in some nebulous time frame with an old timey Western feel.

The three gunfighters are all fleshed out with distinct personalities, strengths and foibles. The reader cannot help but be on their side - despite them being killers in their own rights. My favourite was the lead - Micah Shughrue.

I was somewhat reminded of Stephen King's works. (The Dark Tower series sprang to mind for me and the publisher has mentioned It in the book description.) Cutter lists King as one of his favourite authors and influences. That band of misfits against all evil theme sucks me in every time.

Cutter has a way with descriptions. "Micah Henry Shughrue awoke into a darkness so thick it was like all nights folded together. Darkness stuffed into his mouth and eye sockets, teeming in his nostrils and perched heavy on his chest." That descriptive power is multiplied and magnified when drawing the evil that lives at Little Heaven and in the Black Rock. Perhaps a bit too much for this reader. Some of it became repetitive with the two time frames and I wanted to move on quicker to what was 'behind the curtain.'

Interspersed throughout the story are black and white drawings by Adam Gorham that perfectly capture the tone and tenor of Cutter's words.

Creepy, chilling and scary as hell. Not for the faint at heart - or if bugs really get to you.....Read an excerpt of Little Heaven below.
Posted by Luanne at 7:00 AM

Nick Cutter is a new author to me but it didn't take me a while to see how viscerally shocking it is. I mean, don't get me wrong, the man is brilliant, but man. It's a shock to the system. And this book is creepy as hell!