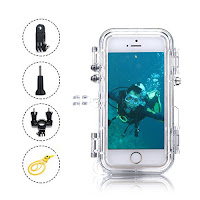 My husband and I have taken up kayaking this year. I've enjoyed taking picture of our travels on the local waterways, but I've been terrified of dropping my Iphone in the water. So when I was offered a chance to review.

On opening the package, I noticed the instructions were inside the waterproof case. My suggestion would be to have them kept separate. I wasn't quite sure how the case opened and didn't want to snap the latches, negating the whole waterproof concept. The case is made of heavy duty plastic material which seems like it would stand up to a drop or two.

There is a card included indicating you should do a waterproof test first using paper towel. I folded a large square inside, snapped the unit shut and submerged it in a large bowl of water. I left it for an hour and there wasn't a drop of water on the paper towel. Check. The unit has an IP68 rating which is: "Protected from total dust ingress. Protected from long term immersion up to a specified pressure."

That same card indicated there is a piece of protective film on the inside screen that needs to be removed before use. I have to say - it was quite difficult to remove this as there was no 'pull tab' or larger edge to grasp. I had to scrape an edge loose with my fingernail to remove it.

Be sure to buy the right size for your phone. My phone fit in snugly and the case latched securely. Instructions indicate you should "set the phone to flight mode, cancel screen automatic lock, raise the screen brightness and be in camera mode before closing the case up, I was intrigued by the wide angle lens (170 degrees) built into the case. The screen covering the control panel is quite thin, so operating the phone was no problem. The wide angle does produce fish eye pictures, but the images are clear and crisp. Sealed stainless steel pins allow you to operate the side buttons.

The set comes with a neck lanyard - very handy to have. The case can be removed from the lanyard to use without having it on your neck. One suggestion would be to have a quick release safety latch on the lanyard. A wrist strap is also include with a lock. This also worked well.

Also included are a number of attachments allowing you to attach the case to your bicycle handlebars (I did try this and it worked) or if the pictures are correct - to your helmet.

I would suggest that OXOQO have someone with substantive English writing skills edit their instruction booklet. I do question the use of a brand name GoPro in their literature and product description.

Overall, this product did exactly what I hoped it would do - kept my Iphone safe from water splashing, ensured that if I did quickly drop it into water, it would be okay (Although I don't think I could do total immersion - just my own fears). I'll be using it at the beach as well to keep the sand out.  And the splash pad. Bottom line - it allowed me to take pictures with less worry!
Posted by Luanne at 7:00 AM