What books caught my eye this week as they passed over the library counter and under my scanner? Ahh, one of my guilty pleasures this week.....Now, I don't have cable, but when I visit my daughter, I'm always up for a HGTV marathon!

First up is The Magnolia Story by Chip and Joanna Gaines.

"Are you ready to see your fixer upper?

These famous words are now synonymous with the dynamic husband-and-wife team Chip and Joanna Gaines, stars of HGTV’s Fixer Upper. As this question fills the airwaves with anticipation, their legions of fans continue to multiply and ask a different series of questions, like—Who are these people?What’s the secret to their success? And is Chip actually that funny in real life? By renovating homes in Waco, Texas, and changing lives in such a winsome and engaging way, Chip and Joanna have become more than just the stars of Fixer Upper, they have become America’s new best friends.

The Magnolia Story is the first book from Chip and Joanna, offering their fans a detailed look at their life together. From the very first renovation project they ever tackled together, to the project that nearly cost them everything; from the childhood memories that shaped them, to the twists and turns that led them to the life they share on the farm today.

They both attended Baylor University in Waco. However, their paths did not cross until Chip checked his car into the local Firestone tire shop where Joanna worked behind the counter. Even back then Chip was a serial entrepreneur who, among other things, ran a lawn care company, sold fireworks, and flipped houses. Soon they were married and living in their first fixer upper. Four children and countless renovations later, Joanna garners the attention of a television producer who notices her work on a blog one day.

In The Magnolia Story, fans will finally get to join the Gaines behind the scenes." 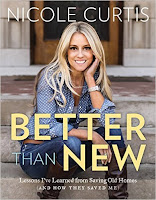 Next up is Better Than New: Lessons I've Learned from Saving Old Homes (and How They Saved Me)  by Nicole Curtis.

"For the first time, Nicole Curtis, the star of the megahit HGTV and DIY Network show Rehab Addict, reveals her private struggles, her personal victories, and the inspiring lessons we can all learn from them.

Part celebrity memoir and part self-help book, Better Than New goes behind the scenes with an entrepreneurial single mom who worked her way from waitress/real estate agent to home renovation expert, preservationist, and television star. With eight chapters in the book—eight lessons told through her life story and through several of the homes she has remodeled—readers will get to see another side of Nicole Curtis, including the private and personal struggles that are not seen on TV. Working in Detroit and Minneapolis, Curtis has opened her fans’ eyes to the beauty of older homes and the value of reclaiming and reusing authentic original materials rather than sending dumpster loads to the local landfill. Curtis applies the same principles to her personal life—valuing old friends, rescuing dogs, and advocating for the wounded, the elderly, and the disadvantaged. Readers will find inspiration to apply to their own lives supplemented with never-before-seen photos of Curtis and the homes she renovates. Better Than New is a visual treat, packed with more than 75 color photographs from Curtis’s personal collection, ranging from family photos to before-and-after photos of the rehabbed homes’ interiors and exteriors."