I wanted to share this great bookmail package I received yesterday...........

Here's the envelope, with a wonderfully intriguing sticker.... "There's a reason you're afraid of spiders." #theywantout 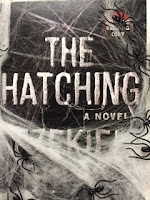 "An astonishingly inventive and terrifying debut horror novel about the emergence of an ancient race of carnivorous spiders, dormant for ten thousand years but now very much awake. There's a reason we're afraid of spiders...

A local guide is leading wealthy tourists through a forest in Peru when a strange, black, skittering mass engulfs him and most of the party. FBI Agent Mike Rich is on a routine stakeout in Minneapolis when he's suddenly called by the director himself to investigate a mysterious plane crash. A scientist studying earthquakes in India registers an unprecedented pattern in local seismic readings. The US president, her defence and national security advisers and her chief of staff are dumped into crisis mode when China "accidentally" drops a nuclear bomb on a desolate region of its own country. As such unsettling occurrences mount, the president's old friend (and her chief of staff's ex-wife), spider expert Melanie Guyer, receives a box at her lab at American University that contains an ancient egg unearthed at a South American dig.

So begins The Hatching, the hair-raising saga of a single week in which an ancient, frighteningly predatory species of spider re-emerges in force. When the unusual egg in Melanie Guyer's lab begins to vibrate and crack, she finds herself at the epicentre of this apocalyptic natural disaster. Working closely with her ex-husband and his very powerful boss, she has to find some way to stem the brutal tide of man-eating arachnids." Releases July 5, 2016. Watch for my review!
Posted by Luanne at 7:00 AM