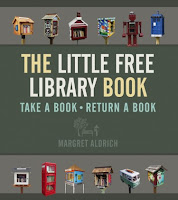 What books caught my eye this week as they passed over the library counter and under my scanner? Books about books.....how could I not take a second look!?

First up is The Little Free Library Book by Margaret Aldrich.

From the publisher, Coffee House Press:

"What started as a simple idea to promote literacy and encourage community has become a movement. Little Free Libraries—front-yard book exchanges—now number more than 20,000 in 75 countries. This tells the history of these charming libraries, gathers quirky and poignant stories from owners, provides a resource guide, and delights readers with color images of the most creative and inspired LFLs around."

Next up is The House of Twenty Thousand Books by Sasha Abramsky.

"The House of Twenty Thousand Books is the story of Chimen Abramsky, an extraordinary polymath and bibliophile who amassed a vast collection of socialist literature and Jewish history. For more than fifty years Chimen and his wife, Miriam, hosted epic gatherings in their house of books that brought together many of the age’s greatest thinkers.

The atheist son of one of the century’s most important rabbis, Chimen was born in 1916 near Minsk, spent his early teenage years in Moscow while his father served time in a Siberian labor camp for religious proselytizing, and then immigrated to London, where he discovered the writings of Karl Marx and became involved in left-wing politics. He briefly attended the newly established Hebrew University in Jerusalem, until World War II interrupted his studies. Back in England, he married, and for many years he and Miriam ran a respected Jewish bookshop in London’s East End. When the Nazis invaded Russia in June 1941, Chimen joined the Communist Party, becoming a leading figure in the party’s National Jewish Committee. He remained a member until 1958, when, shockingly late in the day, he finally acknowledged the atrocities committed by Stalin. In middle age, Chimen reinvented himself once more, this time as a liberal thinker, humanist, professor, and manuscripts’ expert for Sotheby’s auction house.

Journalist Sasha Abramsky re-creates here a lost world, bringing to life the people, the books, and the ideas that filled his grandparents’ house, from gatherings that included Eric Hobsbawm and Isaiah Berlin to books with Marx’s handwritten notes, William Morris manuscripts and woodcuts, an early sixteenth-century Bomberg Bible, and a first edition of Descartes’s Meditations. The House of Twenty Thousand Books is a wondrous journey through our times, from the vanished worlds of Eastern European Jewry to the cacophonous politics of modernity. The House of Twenty Thousand Books includes 43 photos."