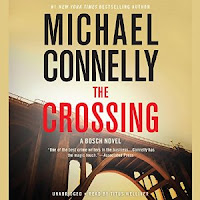 Michael Connelly is one of my favourite crime novelists. I've read every one of the Detective Harry Bosch series. Connelly has another series - the 'Lincoln Lawyer' - featuring defense attorney Mickey Haller. (As well as some stand-alones)

At the end of the last Bosch book, I wondered where Connelly would take things, as Harry quit the force before they could fire him. He's hired his half-brother Haller to sue the department.

Connelly's new book is The Crossing. Haller has a client accused of murder that he truly believes is innocent. And he needs an investigator. Harry 'crosses over' from the prosecutorial side to the defense - with reluctance. But he's intrigued by the case.....

And so was I. Connelly's mysteries are always good, but Harry's crossing over to the 'dark side' was just as interesting. The cop skills are all there, but there's no badge or authority any longer, so Harry has to change the way he pursues a case.  We've seen interaction between Mickey and Harry in past books, but there's much more this time. I really enjoy Mickey's courtroom maneuverings. I did find the college and trip planning for their daughters somewhat extraneous, (and honestly I find Maddie just plain annoying), but it does add a personal note to both characters.

Connelly has kept this series fresh by dropping Harry into a new, uncomfortable situation. Will he stick with it? Stick with Mickey? This reader will be eagerly awaiting the next entry.