After You - Jojo Moyes 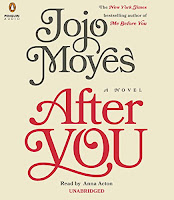 Friends kept telling me that I would really enjoy Jojo Moyes's books. I would nod and add them to my ever growing TBR list. I finally got to them last year. And you know - they were right!

Moyes is a wonderful storyteller, creating wonderful characters that I became totally engaged with and cared about, humorous situations and dialogue, and a storyline that captivates me. And the depth of the storylines caught me off guard initially - Moyes tackles some heavy topics. But she does it really, really well.

Her latest is After You, a follow up to the bestselling Me Before You. Do yourself a favour - read or listen to Me Before You first before this latest.

*Spoiler ahead - stop now if you plan to read the first book.*

For Louisa Clark, life continued after the death of Will. But this isn't the spunky, spirited Louisa we came to love in the first book. She's depressed (and rightly so) working in a dead end bar job in the airport, living away from her family and is just simply existing. Until a knock at the door brings a most unexpected visitor. That visitor, Lily, wakes up Louisa and shakes up her life.

Lily was a hard one for me. I think she had a lot of the same spirit as Louisa, but I found her somewhat annoying for the first bit of the book. And I must admit, I got a little annoyed with Lou for letting her walk all over her. My patience would have given out long before Lou's. But Lily redeems herself as the book progresses.

And it is all about progression and moving forward. For everyone, not just Lou. The families from the first book are also part of this story. (I love Lou's crazy family) And there are some new characters brought in that are just as engaging.

And again, Moyes tackles some hard issues - love, loss, grieving, families and more in her trademark fashion, with insight, empathy and humour.

Did it live up to the first book? For me, not quite, but pretty darn close. There was one too many yes, no, maybe so, will she, won't she situations. And although the ending is 'right', it's not what I envisioned.

I loved Me Before You and need to get to this one soon.

I need to read this though I have read Me Before You. I liked that one very much.

I am interested in Me Before You. I haven't read it yet. This sounds like a good follow-up. She is on my TBR, but I haven't made it to her yet. Maybe I need to soon.