Girl Before a Mirror - Liza Palmer

I've read three of Liza Palmer's previous books and loved them all, especially her characters.  I was eager to see what her latest book, Girl Before a Mirror, would be about and who the protagonist would be!

Anna Wyatt is has just turned forty years old. She's fairly successful in her career, but not so lucky in love. After a year's self imposed celibacy, she's hopeful and ready to dip her toes in the pool. An opportunity out of left field offers her the chance to succeed professionally - and presents the most unexpected opportunity for a romantic encounter - at a romance writer's convention.

I loved Anna. Palmer had me sold when Anna used "Marpling' as a verb in the first few pages.

"If people don't perceive you as a threat, how will they see you coming? They won't."

I liked that she was an older character. The supporting cast of characters is just as engaging - and you're either going to like them - or not. There's no doubt as to who the 'villains' in the book are. The reader can't help but become involved in the story and the outcome.

Those looking for a chick lit novel will find a bit more in Girl Before a Mirror. The romance is there, we have a plucky heroine, a great sidekick and there are many comedic moments. The romance writer's convention is priceless - from the cover models to the theme nights and some of the better lines from one of the books....

But Palmer's plots always include a more serious note. Anna's search for her own strength, direction and desires was really well written.

"Somewhere along the line - I stopped believing I was the hero of my own story. Or that my story was worthy of a hero at all. I settled because that's all I thought I deserved."

Family relations and addiction also figure into the story.  Palmer does a really great job of marrying light and serious into an easy read that was a pleasure from start to finish. Read an excerpt of Girl Before a Mirror. 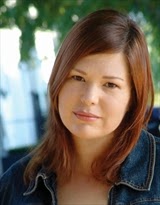 Liza Palmer is the author of the international bestseller, Conversations with the Fat Girl, Seeing Me Naked and A Field Guide to Burying Your Parents. She lives in Los Angeles, California, and is hard at work on her next novel in addition to several film and television projects. You can find as well as Liza Palmer on Twitter and on Facebook. See what others on the TLC book tour thought. Full schedule can be found here.
Posted by Luanne at 7:00 AM

I enjoy that extra bit of depth in a chick lit novel so this book sounds right up my alley. I'm glad you enjoyed it!

I love that the main character is a bit older. Every review of this book makes me want to read it even more!