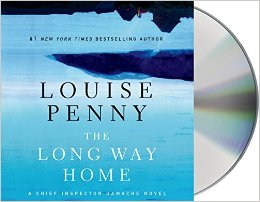 I can't think of a more anticipated next book for mystery fans than The Long Way Home by Louise Penny.

This is one of my absolute all time favourite series. Penny's lead character is Quebec Sûreté Chief Inspector Armand Gamache. The crimes and mysteries are always intricate, well plotted and well written. There was a subtle secondary plot that began early on in the first nine books and it exponentially grew through the first nine books, culminating in a startling conclusion in How the Light Gets In.

Where could this series go after such a ending? Spoilers ahead.....

Many questions that were left at the end of book nine have been answered in the opening pages of The Long Way Home. I felt a little cheated that the resolutions surround Gamache's protégé Jean Guy had taken place without me and that life has moved on without the reader being involved. Gamache has retired to the small village of Three Pines, an oft used setting for Penny. Over the course of the series, readers have come to know and love the residents.

Some more than others. Clara and Peter are artists who make their home in the village. A year ago, Peter left, promising to Clara to return in a year to see if their marriage could be repaired. The year has come and gone with no word from him. Clara enlists Gamache in her search to find him.

So, we have a case that again utilizes Gamache's skills, albeit in an unofficial capacity. The path and the clues to Peter's whereabouts are found in a series of paintings and the world of art. Penny does an admiral job bringing her visual plotline to the written page, but  I did find it a bit esoteric and slower paced than I would have liked. And okay, by the end I was tired of hearing about the upside down smile painting. Jean-Guy, after having factored so heavily in previous novels, has been relegated to the sidelines. There were some odd side stories - notably the androgynous niece/nephew Bean. As a colleague and I discussed one morning, The Long Way Home almost seems like a character study with the mystery of Peter's whereabouts as the secondary plotline.

But my real problem was with Clara. The residents of Three Pines have become quite 'real' over the course of the series. I quite like most of them - notably Ruth and her duck Rosa. But here's my problem - I was never taken with Clara to start with and throughout The Long Way Home my dislike of her steadily grew. This is a testament to Penny's writing skills, but it made it harder to become fully engaged in the case and its outcome.

I've chosen to listen to the last three or four books in this series. Ralph Cosham is the reader. His wonderfully paced, rich, sonorous voice completely embodies Gamache for me. The low, somewhat gravelly tone of Cosham's voice and his well modulated pace just draws you further into the story.  His French accent and pronunciation is well done and believable. The voices he provides for other characters are just as well done. The cranky old poet Ruth is a favourite of mine. Actually, all the residents of Three Pines come alive with his interpretations, and make me wish I could visit to Three Pines and chat with them.Sadly Ralph Cosham passed away this past September.

I enjoyed The Long Way Home, but didn't love this one. Penny is at work on a new novel - and it will be one I'll definitely read. I'm curious as to where she will take Gamache et al next.

I really want to try her work but will start with a different book.

I actually really enjoyed this one. I was fine without seeing how everything worked between books. The last one was so emotional, this one gave me a bit of a break, but I don't think it was the strongest in the series.

Matthew 17
[15] Lord, have mercy on my son: for he is lunatick, and sore vexed: for ofttimes he falleth into the fire, and oft into the water.
[16] And I brought him to thy disciples, and they could not cure him.
[17] Then Jesus answered and said, O faithless and perverse generation, how long shall I be with you? how long shall I suffer you? bring him hither to me.
[18] And Jesus rebuked the devil; and he departed out of him: and the child was cured from that very hour.

Revelation 17
[15] And he saith unto me, The waters which thou sawest, where the whore sitteth, are peoples, and multitudes, and nations, and tongues.
[16] And the ten horns which thou sawest upon the beast, these shall hate the whore, and shall make her desolate and naked, and shall eat her flesh, and burn her with fire.