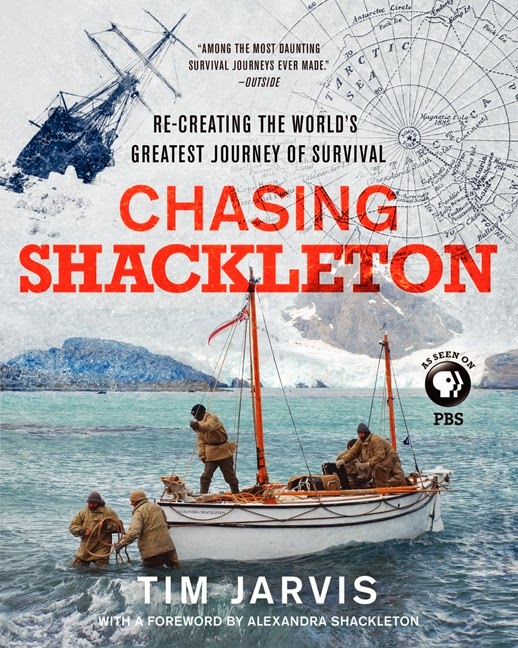 What books caught my eye this week as they passed over the library counter and under my scanner? It's all about history this week.....

First up is Chasing Shackleton: Recreating the World's Greatest Journey of Survival by Tim Jarvis.

From the publisher, William Morrow:

"In this extraordinary adventure memoir and tie-in to the PBS documentary, Tim Jarvis, one of the world's leading explorers, describes his modern-day journey to retrace, for the first time ever—and in period clothing and gear—the legendary 1914 expedition of Sir Ernest Shackleton.

In early 1914, British explorer Sir Ernest Shackleton and his team sailed for Antarctica, attempting to be the first to reach the South Pole. Instead of glory, Shackleton and his crew found themselves in an epic struggle for survival: a three-year odyssey on the ice and oceans of the Antarctic that endures as one of the world’s most famous tales of adventure, endurance, and leadership ever recorded.
In the winter of 2013, celebrated explorer Tim Jarvis, a veteran of multiple polar expeditions, set out to recreate Sir Ernest Shackleton’s treacherous voyage over sea and mountain, outfitted solely with authentic equipment—clothing, boots, food, and tools—from Shackleton’s time, a feat that has never been successfully accomplished.

Shackleton's Epic is the remarkable record of Jarvis and his team’s epic journey. Beautifully designed and illustrated with dozens of photographs from the original voyage and its modern reenactment, it is a visual feast for readers and historians alike, and an essential new chapter in the story that has inspired adventurers across every continent for a century."

And here's one for all the Downton Abbey fans out there - Servants: A Downstairs History of Britain from the Nineteenth Century to Modern Times by Lucy Lethbridge.

From the publisher, W.W. Norton:

"From the immense staff running a lavish Edwardian estate and the lonely maid-of-all-work cooking in a cramped middle-class house to the poor child doing chores in a slightly less poor household, servants were essential to the British way of life. They were hired not only for their skills but also to demonstrate the social standing of their employers—even as they were required to tread softly and blend into the background. More than simply the laboring class serving the upper crust—as popular culture would have us believe—they were a diverse group that shaped and witnessed major changes in the modern home, family, and social order.  Spanning over a hundred years, Lucy Lethbridge in this "best type of history" brings to life through letters and diaries the voices of countless men and women who have been largely ignored by the historical record. She also interviews former and current servants for their recollections of this waning profession.

At the fore are the experiences of young girls who slept in damp corners of basements, kitchen maids who were required to stir eggs until the yolks were perfectly centered, and cleaners who had to scrub floors on their hands and knees despite the wide availability of vacuum cleaners. We also meet a lord who solved his inability to open a window by throwing a brick through it and Winston Churchill’s butler who did not think Churchill would know how to dress on his own.

A compassionate and discerning exploration of the complex relationship between the server, the served, and the world they lived in, Servants opens a window onto British society from the Edwardian period to the present."