The Bookman's Tale: A Novel of Obsession by Charlie Lovett releases in paperback on May 27/14. And thanks to the generosity of Penguin Books, I have a copy to giveaway to one lucky reader.

"A mysterious portrait ignites an antiquarian bookseller’s search through time and the works of Shakespeare for his lost love.

Guaranteed to capture the hearts of everyone who truly loves books, The Bookman’s Tale is a former bookseller’s sparkling novel and a delightful exploration of one of literature’s most tantalizing mysteries with echoes of Shadow of the Wind and A.S. Byatt’s Possession.

Nine months after the death of his beloved wife Amanda left him shattered, Peter Byerly, a young antiquarian bookseller, relocates from North Carolina to the English countryside, hoping to outrun his grief and rediscover the joy he once took in collecting and restoring rare books. But upon opening an eighteenth-century study of Shakespeare forgeries, he discovers a Victorian watercolor of a woman who bears an uncanny resemblance to Amanda. 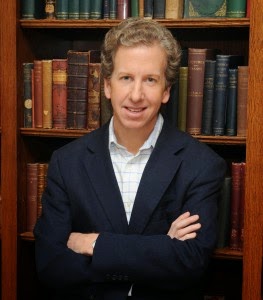 Peter becomes obsessed with learning the picture’s origins and braves a host of dangers to follow a trail of clues back across the centuries—all the way to Shakespeare’s time and a priceless literary artifact that could prove, once and for all, the truth about the Bard’s real identity."

Read an excerpt of The Bookman's Tale. Penguin has put together a great kit for book clubs as well. Charlie Lovett is a writer, a teacher, and a playwright. He and his wife split their time between Winston-Salem, North Carolina, and Kingham, Oxfordshire, in England. You can find Charlie Lovett on Facebook.

Sound like a book you'd like to read? I have one copy of the upcoming paperback to giveaway. Simply leave a comment to be entered. Open to US and Canada. Ends June 7/14.
Posted by Luanne at 6:30 AM

Email ThisBlogThis!Share to TwitterShare to FacebookShare to Pinterest
Labels: giveaway, Penguin Books US

I think my mom would like this one. Thanks for the giveaway! kathy(at)bermudaonion.net

Thanks for this giveaway. sounds enjoyable. saubleb(at)gmail(dot)com

A novel which I would love to read. elliotbencan(at)hotmail(dot)com

This sounds like the perfect story for the booklover in all of us. The link to Shakespeare's time, and true identity, coupled with the mysterious watercolor make it sound like a book I'd really enjoy reading this summer. Thanks for the chance to win a copy. carlscott(at)prodigy(dot)net(dot)mx

Sounds intriguing! A mystery that leads back through history.

Definitely a book I would love to read, the storyline and the timeline have it all.
Thanks for the chance to win it.

It definitely sounds like an interesting book. I love the mystery of the woman in the watercolor, and would love to find out who she is. Thanks for having the giveaway.

I sure do appreciate that you, unlike most other book bloggers,simplify the process to enter a contest for a giveaway. Moat bloggers force you to jump through several hoops with their Rafflecopter. Sometimes it makes me angry when a blogger has me hunting through all their other book reviews, commenting here, commenting there, coming back, retyping my name and password several times, etc. I often just skip it.

forgot to tell you my email:
bethvollbach(at)sbcglobal(dot)net

I'd love to read this! :)
readerrabbit22 at gmail.com

Sounds like my kind of book. I loved both Possession and The Shadow of the Wind!