"It was only ever meant to be a game. A game of consequences, of silly forfeits, childish dares. A game to be played by six best friends in their first year at Oxford University. But then the game changed: the stakes grew higher and the dares more personal, more humiliating, finally evolving into a vicious struggle with unpredictable and tragic results."

Black Chalk opens in present day with an unnamed narrator remembering his first days at Oxford and the beginning of the game. The narrative flips between then and now....fourteen years later when we know something has gone horribly wrong. Our narrator is not mentally stable, rarely ventures outside, doesn't open his curtains and has an elaborate system to remind himself to eat and drink. He begins to write down his memories of that time - but are they reliable?

I was quite sure I knew which of the six was the narrator, then found I was mistaken - and that my assumptions about the path the book would take were all quite wrong. Yates drops little hints throughout via small offhand comments or bits of foreshadowing that had me constantly guessing as to who the survivor be.

Reading Black Chalk was like watching a frightening film - you know, that creepy feeling in the pit of your stomach when you know characters are making decisions that can't end well. And yet, you can't stop watching (reading) until you know how it ends.

And Black Chalk was frightening. Although Yates has penned a fictional work, I think the origins of it are based in truth. As I read, I thought of hazings gone wrong at schools, the desire to 'fit in', to be the 'winner'. But at what cost? And who decides to 'up the stakes'?

"And none of them seemed for even a moment to consider that, for the Game to end, they would have to subject one another to greater and greater humiliations. It couldn't remain light-hearted forever."

And it doesn't. Yates takes his characters and plot to some dark places. Black Chalk is a twisting labyrinth of a tale with something terrible waiting at the centre. My only quibble is the ending - I found it a bit unsatisfying. But I think it's just my desire for all threads to be neatly tied up and resolved. Read the first two chapters of Black Chalk. 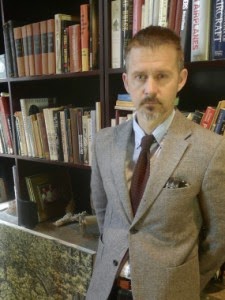 "Christopher J. Yates studied law at Wadham College, Oxford from 1990-93 and initially pursued a career in law before he began working in puzzles, representing the UK at the World Puzzle Championships. Since then he has worked as a freelance journalist, sub-editor and puzzles editor/compiler. In 2007 he moved to New York City with his wife, and currently lives in the East Village." You can find Christopher J. Yates on Twitter and on Facebook."

I'm starting off the TLC book tour for Black Chalk today. See what other bloggers thought of Black Chalk. Full schedule can be found here.

I have a copy of Black Chalk to give away to one lucky reader. And it's international! Simply leave a comment to be entered! Ends April 19/14.
Posted by Luanne at 6:30 AM

Thanks for making it open to all. Much appreciated. Please count me in.

Interesting. Thanks for this feature. saubleb(at)gmail(dot)com

Thanks for the giveaway! This book sounds very interesting. spectralcountry [at] gmail [dot] com

Huge thanks, Luanne, for including me on A Bookworm's World. And so pleased to hear that you enjoyed Black Chalk. And yes, the plot was based somewhat on truth. I spoke to Publisher's Weekly about it here:
http://publishersweekly.com/pw/by-topic/authors/interviews/article/61541-never-trust-the-artist-pw-talks-with-christopher-j-yates.html

Wow, this sounds so dark and intriguing, right up my alley. Thanks for the chance to win a copy, Luanne. carlscott(at)prodigy(dot)net(dot)mx

I would absolutely love to read this one!
mmyheartishere@gmail.com

It sounds like a suspenseful story, not knowing what will happen.
mce1011 AT aol DOT com

It's crazy to me that people can get involved in things like this ... but it certainly makes for some fascinating - and frightening - reading!