Still looking for gift for the book lover on your list? Canadian shoppers - here's a great suggestion... Hidden by Catherine McKenzie. ( US readers - you can preorder your copy - to be released in April 2014)

I never know what to expect when I start one of  Catherine's books - all four have been completely different reads. What I do know is that I'm going to enjoy it.

What if you died unexpectedly? What if there were secrets you were keeping? What would happen then....

Catherine McKenzie has written a very real, insightful and powerful novel exploring the complex and complicated relationships that shape our lives. This would be a fantastic selection for a book club - Catherine has come up with a set of questions sure to start a great discussion.

Another fantastic novel from a very talented author. I can't wait to see what she comes up with for book number five! (This review originally posted June 28/13)

A graduate of McGill University in History and Law, Catherine practises law in Montreal, where she was born and raised. An avid skier and runner, Catherine’s novels, Spin, Arranged and Forgtotten, are all international bestsellers. Her fourth novel, HIDDEN, was released in June, 2013 in Canada and in Spring 2014 in the US. Her novels have been translated into French, German, Czech, Slovak and Polish. And if you want to know how she has time to do all that, the answer is: robots. You can find Catherine McKenzie on Twitter and on Facebook. 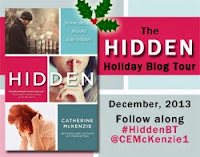