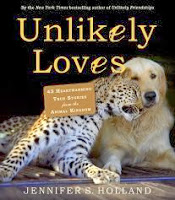 What books caught my eye this week as they passed over the library counter and under my scanner? Yep it's cute animal stories week.....

First up was Unlikely Loves: 43 Heartwarming True Stories from the Animal Kingdom by Jennifer S. Holland.

From the publisher, Workman Books:

"Unlikely Friendships is the phenomenal New York Times bestseller that’s spent 44 weeks on the list and has 615,000 copies in print. It’s struck a chord with media, from CBS This Morning to USA Today, and Temple Grandin has praised it as “amazing. It shows the power of friendship.” Now its author, Jennifer Holland, who writes about animal relationships with insight, compassion, and a fine narrative touch, explores animal attachments that, in human terms, can only be called love.

Packed with beautiful, breathtaking full-color photographs, Unlikely Loves is a celebration of love between species. Here are stories of parental love, like the Dalmatian who mothers a newborn lamb—a lamb that just happens to be white with black spots! Stories of playful love, including the fox and the hound who become inseparable. And stories of orphaned animals who have found family-like ties in unexpected combinations, like the elephant who’s bonded with sea lions, goats, and other animals in her walks around the Oregon Zoo.

Ms. Holland has interviewed scientists, zoologists, and animal caretakers from around the world, tracking down firsthand sources and eyewitnesses. The stories are written with journalistic integrity and detail—and always filled with the author’s deep affection for her subjects."

Next up was A Street Cat Named Bob: And How He Saved My Life by James Bowen.

From the publisher, Thomas Dunne Books:

James is a street musician struggling to make ends meet.
Bob is a stray cat looking for somewhere warm to sleep.
When James and Bob meet, they forge a never-to-be-forgotten friendship that has been charming readers from Thailand to Turkey.
A Street Cat Named Bob is an international sensation, landing on the bestseller list in England for 52 consecutive weeks and selling in 26 countries around the world. Now, James and Bob are ready to share their true story with the U.S. in this tale unlike any you’ve ever read of a cat who possesses some kind of magic.
When street musician James Bowen found an injured cat curled up in the hallway of his apartment building, he had no idea how much his life was about to change. James was living hand to mouth on the streets of London, barely making enough money to feed himself, and the last thing he needed was a pet. Yet James couldn't resist helping the strikingly intelligent but very sick animal, whom he named Bob. He slowly nursed Bob back to health and then sent the cat on his way, imagining that he would never see him again. But Bob had other ideas.
Perfect for fans of Marley & Me: Life and Love with the World's Worst Dog and Dewey: The Small-Town Library Cat That Changed the World, this instant classic about the power of love between man and animal has taken the world by storm and is guaranteed to be a huge hit with American fans as well."
(Over the Counter is a regular feature at A Bookworm's World. I've sadly come to the realization that I cannot physically read every book that catches my interest as it crosses over my counter at the library. But...I can mention them and maybe one of them will catch your eye as well. See if your local library has them on their shelves!)
Posted by Luanne at 7:36 AM