The Theory of Opposites - Allison Winn Scotch- Review AND Giveaway

Allison Winn Scotch is an author whose name I was familiar with - I've read many, many positive reviews of her book. But, her latest (5th) book, The Theory of Opposites, is the first one I've read. And I wish I'd picked up one of her books sooner - she really is a delight to read.

Willa and Shawn are that couple - you know  - the ones who do everything together, don't fight and seem to have it all. You know - Shilla.

Because Willa believes it all - we don't control our fate. Our lives are pre - determined. Her father's best selling book "Is It Really Your Choice? Why Your Entire Live May Be Out Of Your Control", has been the defining force in her life....."No one has a choice. We all lead the lives we were meant to live."

Until her best friend Vanessa challenges her to take a chance, change her life and live her life exactly opposite to her father's theory....

It takes a bit to make me laugh, but I have to tell you that I was chuckling out loud in the lunch room reading the first few chapters of The Theory of Opposites. Winn Scotch has created absolutely wonderful characters - I was rooting for Willa every step of the way. Her doubts, her insecurities, her thoughts, her dialogue were realistic. The eventual outcome was so satisfying. (Willa and Vanessa would be great friends to have!) The supporting cast was no less endearing. Willa's family had me in stitches, as did the emails sent amongst the family. Scotch is a clever, clever wordsmith.

So, yes there's a huge, fun, chick lit element to the book. But it goes much deeper than that. Willa has to decide if she has the desire, the want and the need to change and be the master of her own fate. So, yes, this is a coming of age story - albeit a little later in life. And it's not just Willa - all of the characters are searching for something. I have to say, Winn Scotch made me stop and think about my own life. Truly is it ever too late to try something new, make changes and just grab life with both hands?

What an excellent introduction to a talented writer. This may have been my first book by Winn Scotch, but definitely won't be my last. Read an excerpt of The Theory of Opposites. 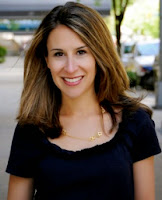 "Allison Winn Scotch is the bestselling author of four novels, including Time of My Life, The Song Remains the Same, The One That I Want, and The Department of Lost and Found. Her fifth novel, The Theory of Opposites, will be released on November 12, 2013. In addition to fiction, she pens celebrity profiles for a variety of magazines, which justifies her pop culture obsession and occasionally lends to awesome Facebook status updates. She lives in Los Angeles with her family." You can keep up with Allison Winn Scotch on Facebook and on Twitter.

Sound like a book you'd like to read?! I've got a copy to giveaway to one lucky reader. Open to US only. Simply leave a comment to be entered. Closes November 30/13.

I've heard a lot of great things about her work, too, but haven't read any of her books so I'd love to be entered in your great giveaway!

What a cute book. Can't wait to read it.

I love laugh out loud books, so count me in!

I read a synopsis yesterday. This character is in for some changes, ya gotta cheer for her. Thanks for the chance to win a copy of The Theory of Opposites, I think we'd both enjoy it.

Loved her first book The Department of Lost and Found

Even us really old seniors can change - really!

Thanks for this lovely giveaway which sounds delightful. saubleb(at)gmail(dot)com

What a wonderful book. Many thanks. elliotbencan(at)hotmail(dot)com

Oh, I read her book TIME OF MY LIFE and really enjoyed it. I've been hearing great things about her latest and have it in my to buy list now!

Don't know Allison; or Luanne...but the intro to the book sounds like our lives...opposites. Happened upon this site reading about Sanctus by Toyne..thks

This book sounds like a great fun read. I really like the character of Willa. Thanks for having this giveaway.

It looks like you will be selling a lot of books. I love your humor.

I just stumbled on this blog, and I love it already! This book sounds like a lot of fun.

I loved "The One That I Want" and I bet this new one is just as good!
bookfriend44@yahoo.com