I'm thrilled to welcome one of my favourite Canadian authors - Catherine McKenzie - to A Bookworm's World today. Catherine's newest book - Hidden - is newly released (my review)

I've been a fan since the debut of Spin in 2010. We did a guest post back then as well. Spin was a fun read, but also touched on a serious issue - addiction. Arranged was more chick lit with a touch of magic. I adored Forgotten  and yes, there were lots of chick lit elements, but I loved the idea of remaking your life. Every book has been completely different. Which brings us to Hidden and again a new direction. Where does your inspiration /idea for a book spring from? And the main character? Do you have a firm idea of where the book will go and end? Or do things change along the way? How 'real' do your protagonists become for you? Whew! Lots of questions!

"It's funny, because when I sat down to write my first book (Arranged) I didn't really think about genre. By that I mean, I didn't set out to deliberate write chick lit or women's fiction (whatever that is, really). I just had this idea in my head and I wanted to see if I could write it as a novel. I knew that some would characterize it as women's fiction (not that there's anything wrong with that!), but I really was just trying to write the best book I could at the time with the idea that wouldn't leave me alone. Same thing for Spin and Forgotten, too. And now with Hidden, again, I got the idea for the book, but I also wanted to stretch myself as a writer. I wanted to challenge myself by writing from three points of view, by writing from a male perspective. I'm an eclectic reader and my ideas come from all sorts of things; pop culture, stories I hear, some things I've experienced but not in the way you'd think (I really try not to write about myself). And I hope that my readers enjoy the fact that my books are all distinguishable from one another. I know that when fans contact me (which is awesome, thank you, thank you) everyone has a different favourite book of mine and for different reasons too. I love that. 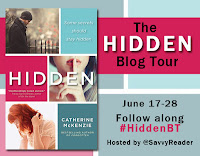 As to the mechanics of how I write it goes something like this: (1) overall idea. (2) title (I love my one word titles). (3) Main character sketch (or main characters in the case of Hidden). (4) See the end -- where is this book going to go, where does the premise take you. (5) the twist -- what's the surprise going to be? Once I have those things down (mostly in my head) I start writing, usually without much more of an outline than that. I did use more of an outline for Hidden (I had to) but really, I suck at outlining.
The characters do become real to me. I have to find their voice to write in and when I'm writing them, I have to be in their voice. But once I get to the end of a book, I'm ready to let them go. Some writer friends talk about missing their characters, being sad that they can't spend more time with them. But I know a book is finished, that I've said all I could the best I could, when I know that I'll be fine without my characters, that they are no longer in my head, but on the page."

Thank you so much for stopping by Catherine. I love hearing the story behind the words!  You can find Catherine McKenzie on Facebook (Catherine is hosting an excerpt of Hidden on her Facebook page. The more ‘Likes’ she gets, the more she reveals.)  and  you can connect with Catherine on Twitter, as well as follow along with the blog tour  with the hashtag #HiddenBT. Or check out the tour page on The Savvy Reader.
Posted by Luanne at 6:45 AM

I love the fact that the ideas won't leave her alone - it sounds like she was meant to be a writer.