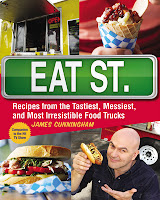 The local city council for the city I work in has been debating for the last few months on whether or not to allow mobile food trucks in the city. Their initial proposal was to allow three trucks at three specific sites between eight am and nine pm. In a city of over 350,000 people. That recommendation didn't pass and this hot potato issue is back on the table. (pun definitely intended)
But perhaps City Council should investigate a little closer - either by watching Eat St. on the Food Network or by picking up the companion book -Eat St. from Pintail Books. (There are quite a few Canadian entries)
Comedian James Cunningham is the host of Eat St. "It has been a wild ride traveling all over North America and the U.K. to find the most daring, delicious, and inventive street food around." And now fans can have the "recipes from the Tastiest, Messiest, and Most Irresistible Food Trucks"
Of course there are fries - a staple of the wagons found nearly everywhere. But these are not your ordinary greasy spoon fries. Next time I'm in Calgary, I'll be looking up the Fries and Dolls truck and their 'Farrah' fries - garlic, parsley, pink sea salt and Padano cheese......yum.

Burgers and dogs are also taken to a new level. Burgers with crushed pineapple as the secret ingredient.  Peanut butter with that burger? Japanese fusion hot dogs. How about a side of beet home fries to go with that?

Sandwiches - oh man, I was drooling through this chapter - The veggie melt from The Grilled Cheese Truck looks so delicious (and healthy) A little far for me to go (they operate in LA) but I've got the recipe bookmarked.

There's a separate chapter on tacos and wraps.... cones. Yes cones - and not filled with ice cream, but mac and cheese with bacon topping. Those of you in Baltimore can stop by the Gypsy Queen Cafe for a taste.

Soups, noodles, seafood, salads, pasta and so much more. Truly - every food imaginable can be had on a food truck somewhere. Ohh - and the last chapter - sweet stuff....smoothies, donuts, cookies, donuts and cupcakes (maple-bacon anyone?)

There are so many wonderfully different trucks represented, each featured along with the recipe of their signature dish. Eat St. is a fabulous exploration of a wildly creative, talented bunch of chefs who just happen to operate on wheels. Have a peek inside Eat St.

(There are some very cleverly named trucks out there - I Dream of Weenie, The Dogfather Diner and The Rolling Stove to name just a few)
Posted by Luanne at 7:00 AM

Food trucks are really hot in our area these days and I don't really get the attraction. Sure, the food is good and is cheaper but I want a place to sit while I eat.

Our city recently revitalized an area in downtown and has allowed a few food trucks to open up.

I haven't tried any yet, because the line ups are always too long!

The nearby restaurants aren't happy because it takes away their business, but competition isn't always a bad thing.

The book looks awesome - I'll be looking for it in my local bookstore!