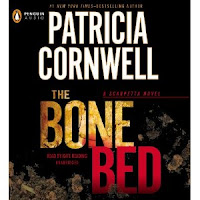 When Patricia Cornwell first started writing, I loved her books featuring forensic pathologist Kay Scarpetta. But, slowly but surely the love affair ended and I stopped following this series.  Well, recently I needed something to listen to, so I decided, what the heck, I'll give her another shot. So I picked up her latest book - The Bone Bed.

Scarpetta receives an email which documents a crime committed against an American paleontologist working in Alberta and now missing. Lucy finds evidence that the clip may be connected to a murder on U.S. soil. So, a good premise and I was intrigued.

But....although I enjoy personal story lines in addition to the main plot, I quickly grew tired of listening to what seemed to be the same old, same old. Benton and Kay are having relationship problems, Lucy is being secretive, Kay's staff are betraying her, Marino is in trouble again. Sound familiar? Cornwell fills out the story with endless detail - which refrigerator is the parmigiana in - number one or two? "I check my oversized titanium watch on its rubber strap and reach for my coffee—black, no sweetener—as distant footsteps sound in the corridor of my bullet-shaped building on the eastern border of the Massachusetts Institute of Technology’s campus. It isn’t light out yet this third Monday of October." First lines of chapter one.

The reader was Kate Reading. I have to admit she's not one of my favourite narrators. I find her habit of dwelling on final consonants and drawing out words slightly annoying. But her tone does seem to fit the character of Kay, who seems to see herself as somewhat superior and whom I find supercilious.

The ending and the 'culprit' were such a letdown. And confirmed why I will be saying goodbye again to Patricia Cornwell. If you're so inclined - read an excerpt of The Bone Bed.

(The title The Bone Bed refers to the dinosaur bone deposits in Alberta, Canada. Although they are featured in the opening scene, they truly didn't have a lot to do with the story. It almost felt like Cornwell was copying Kathy Reich's penchant for using the word bone in many of her titles that also feature a forensic pathologist.)

Email ThisBlogThis!Share to TwitterShare to FacebookShare to Pinterest
Labels: series