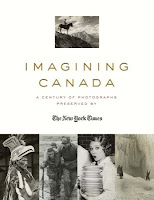 It's a busy time of the year and my reading has slowed down....so you, dear reader, get an extra helping of Over the Counter this week!

What book caught my eyes this week as it passed over the library counter and under my scanner?

From the publisher Doubleday Canada:

"Sophisticated and well-curated, this photographic tour through Canada's history documents the nation's evolution over more than a century, as seen through the lens of photographers from The New York Times. The book compiles more than 100 iconic, momentous and inspiring images of Canada and includes ten commentary pieces from a range of important thinkers, historians and writers, including National Chief Shawn Atleo, MP Justin Trudeau, historians Charlotte Gray, Peter C. Newman and Tim Cook, and sports columnist Stephen Brunt. Through these pages and images, which represent a portal in time, a portrait of Canada emerges, not as seen by its own citizens, but as viewed through a distinctly American lens.

The book includes photos arranged according to the following themes:
• The Battlefield: Canada at War

• Aboriginal People
• The Changing Face of Canadian Society—Our Immigration Story
• Landscape
• The Political Arena
• Industry
• The War Machine: How the Homefront Supplied the Wars
• Hockey
• Icons (Stars, Sports Heroes, Political Figures, Royalty)"
(Over the Counter is a regular feature at A Bookworm's World. I've sadly come to the realization that I cannot physically read every book that catches my interest as it crosses over my counter at the library. But...I can mention them and maybe one of them will catchy your eye as well. See if your local library has them on their shelves!)
Posted by Luanne at 6:30 AM