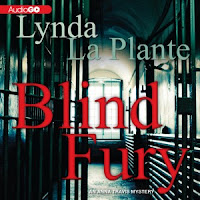 Yes, I did just review a Lynda LaPlante title recently. (Blood Line - my review) That was my first introduction to the Detective Inspector Anna Travis series. Well, I was in need of an audio book to listen to, so I thought I would download the previous book - Blind Fury.

DI Travis is called in when a young woman's body is found in a ditch by a highway service station. With the amount of traffic passing through and by, finding a suspect will be difficult. But when further investigation turns up another young woman killed in the same manner, the team realizes they may have a serial killer on their hands. But what they don't have is any clues. Convicted killer Cameron Walsh insists he has information to share - but he will only talk to Anna - the copper who put him behind bars.

The reader was Kim Hicks. Her voice was excellent, providing lots of different voices and accents for various characters.

It's always different listening to a book rather than reading. Unless you fast forward, you hear every word. If you're reading, it's possible to skim over some passages. I enjoyed the plotting in Blind Fury crime and the solid investigation by the team. What I did find a bit tiresome was Anna's love life in this book. It was all a bit swoony for me. Now, I will rarely go backwards in a series as I find it frustrating to already know what's going to happen and where the character is going. And in this case, I was right. I knew what the shock was going to be in the final chapters and it did spoil the book a bit for me.

So, will I read/listen to another Anna Travis book? Yes, as I really enjoyed Blood Line. But I won't be hunting down any others in the back list. Read an excerpt of Blind Fury.