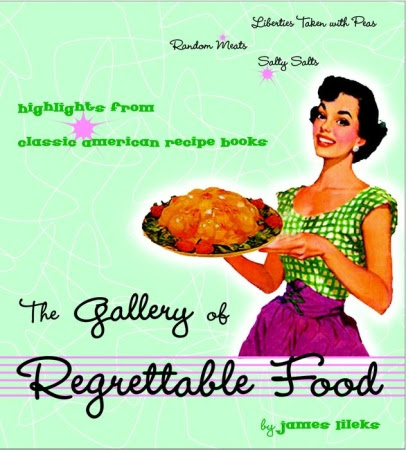 The Gallery of Regrettable Food by James Lileks was was the latest book to catch my eye as it passed over my counter and under my scanner.

Honestly, it was priceless! And my old nemesis from childhood - the pineapple and carrot shreds solidified in a block of flavoured gelatin makes an appearance......
From The Crown Publishing Group:

"The Gallery of Regrettable Food is a simple introduction to poorly photographed foodstuffs and horrid recipes from the Golden Age of Salt and Starch. It's a wonder anyone in the 1940s, '50s, and '60s gained any weight. It isn't that the food was inedible; it was merely dull. Everything was geared toward a timid palate fearful of spice. It wasn't non nutritious -- no, between the limp boiled vegetables, fat-choked meat cylinders, and pink whipped Jell-O desserts, you were bound to find a few calories that would drag you into the next day. It's just that the pictures are so hideously unappealing.

Author James Lileks has made it his life's work to unearth the worst recipes and food photography from that bygone era and assemble them with hilarious, acerbic commentary: "This is not meat. This is something they scraped out of the air filter from the engines of the Exxon Valdez." It all started when he went home to Fargo and found an ancient recipe book in his mom's cupboard: Specialties of the House, from the North Dakota State Wheat Commission. He never looked back. Now, they're not really recipe books. They're ads for food companies, with every recipe using the company's products, often in unexpected and horrifying ways. There's not a single appetizing dish in the entire collection.

The pictures in the book are ghastly -- the Italian dishes look like a surgeon had a sneezing fit during an operation, and the queasy casseroles look like something on which the janitor dumps sawdust. But you have to enjoy the spirit behind the books -- cheerful postwar perfect housewifery, and folks with the guts to undertake such culinary experiments as stuffing cabbage with hamburger, creating the perfect tongue mousse when you have the fellas over for a pregame nosh, or, best of all, baking peppers with a creamy marshmallow sauce. Alas, too many of these dishes bring back scary childhood memories."

(Over the Counter is a regular feature at A Bookworm's World. I've sadly come the realization that I cannot physically read every book that catches my interest as it crosses over my counter at the library. But... I can mention them and maybe one of them will catch your eye as well. See if your local library has them on their shelves!)
Posted by Luanne at 4:01 AM

This looks pretty fun. I hated that pineapple/carrot jello and my mom fixed it all the time. The texture was just so gross!

The first thing that came to mind after reading your title was corn hamburger bake. When we were newly weds (way back in the 60's) I found a recipe and it sounded good but it was disgusting. Every time we hear of something weird or gross foodwise we just look at each other and say corn hamburger bake. My mother's spice rack consisted of salt and pepper.

Patti - I think that jello mixture is universally known and hated...

Kaye - My husband will not eat hamburger to this day as most of his childhood meals were a variation on 'corn hamburger bake'!

The food from my childhood was pretty dull. The book sounds like fun!

I just want to say that the pineapple/carrot jello thing makes me shudder. And, yes, my Mom made it a lot - with shredded cheddar cheese in it too - lemon jello. Can't stand lemon jello to this day.

I think I need to take a look at this book. My Mom had some very odd salads, mixture-wise. And, yet, she would refuse to mix salad greens, carrots, celery, tomatoes, etc. because she was afraid that there were parts of a green salad that people didn't like. She'd put it on a platter seperately. Odd again! LOL

This book really is funny! Have you read the other Lileks books or seen his website? He also has regrettable decorating ideas (mostly from the 70s) and the book my children liked best was something about bad ideas for raising babies.

Kathy - lucky you! But you many want to try one of the concotions included just to see....

Jeanne- I found out about his other books when I went to his website. I'm hoping the library has some of them - they sound hilarious.

Aha - you just found the perfect gift for my sister this year! Thank you, lol!

Ha Michele - just beware if she asks you over to dinner....

I want! I've actually tried to make some very old recipes before and they just never turn out right. It makes me feel better to think they were never right to begin with...

Jen - it would actually be a funky party if you did make some of the recipes!