The Woman Outside My Door - Rachel Ryan 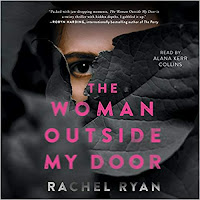 The Woman Outside My Door is Rachel Ryan's debut novel.
What's it about? From Simon and Schuster Audio:
"All children have imaginary friends, Georgina tells herself. It’s perfectly normal, and they all grow out of it in the end. But when her seven-year-old son, Cody, tells her about New Granny, the friend he’s met in the park, Georgina is instantly suspicious. Something—call it maternal instinct—tells her he isn’t making it up.
But maybe Georgina is losing her mind. It wouldn’t be the first time, after all. And with her own mother’s recent death leaving her bereft and trying to cope with life as a busy working mom, it’s no wonder she’s feeling paranoid that Cody has invented a “New Granny” to replace his beloved grandmother.
Her husband, Bren, becomes the voice of reason, assuring Georgina that it’s just a game, the product of their son’s overactive imagination. But what if Cody’s imaginary friend is not so imaginary after all."
My Thoughts:
There are times when an audiobook is a much better 'read' for me than a printed book. The Woman Outside My Door was one of those books.
There is so much emotion woven throughout this novel - love, betrayal, loss, fear, guilt and much more. Alana Kerr Collins was the reader and she did a wonderful job of interpreting and presenting Ryan's work. Her accent is lilting and very pleasant to listen to. She enunciates well and is easy to understand. She captures all of that emotion quite easily. I've said this before, but a good narrator makes you feel like you're right alongside the characters in an audiobook. Such is the case with this reading.
Ryan did a great job of keeping the listener guessing - is New Granny real or is she an imaginary friend? There are a number of supporting players offered up that could indeed be the culprit - if she was real. And a number of reasons why Cody would have invented her if she isn't.' I liked the uncertainty. Ryan keeps things moving along at a good clip, building the tension as things hurtle towards the inevitable. I stayed up quite late, listening to 'just one more chapter' until I was so close to the end that I wouldn't have been able to sleep without knowing the outcome. The final reveal was good and without providing spoilers, provides food for thought for those unaware. I know - enigmatic - but necessary.
Listeners will be firmly on Georgina's side, even as others question her mental state.
The Woman Outside My Door was a great debut and I would absolutely pick up Ryan's next book. Hear for yourself - listen to an excerpt.
Posted by Luanne at 9:00 AM

This sounds really good -- just added it to my wishlist.

Sounds cryptic! need to read it too.

Hi Dianna and Mystica - I look forward to hearing your thoughts!