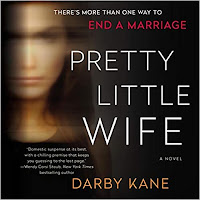 Darby Kane is a pseudonym for author Helen Kaye. Pretty Little Wife is her first book published under the Kane name.
What's it about? From Harper Collins Audio:
"Darby Kane thrills with this twisty domestic suspense novel that asks one central question: shouldn't a dead husband stay dead?
Lila Ridgefield lives in an idyllic college town, but not everything is what it seems. Lila isn’t what she seems.
A student vanished months ago. Now, Lila’s husband, Aaron, is also missing. At first these cases are treated as horrible coincidences until it’s discovered the student is really the third of three unexplained disappearances over the last few years. The police are desperate to find the connection, if there even is one. Little do they know they might be stumbling over only part of the truth….
With the small town in an uproar, everyone is worried about the whereabouts of their beloved high school teacher. Everyone except Lila, his wife. She’s definitely confused about her missing husband but only because she was the last person to see his body, and now it’s gone."
My Thoughts:
I enjoy domestic suspense novels - they're usually fully stocked with twists and turns. And I do quite enjoy a good twisty tale. Killing your husband and then having the body disappear was a good starting point! Lila of course is a 'person of interest' in her husband's disappearance. Kane gives us other suspects to consider along the way, but Lila seems to be the most likely culprit. Proving that though, will take some work. The cat and mouse game between Lila and the lead detective, Ginny, was probably the part I enjoyed the most. The reader is privy to Lila's thoughts and secrets as well as how the police investigation is progressing. I did find I confused two of those other suspects along the way as they seemed very similar to me. There's also an investigation by a podcast team into the disappearance of other women. So...lots going on in this town!
I chose to listen to Pretty Little Wife. The reader was Xe Sands - she's a favorite of mine. She was the perfect choice to read this book. She has a measured way of speaking, paced to capture the nuances of the plot and the character speaking. Different voices are used and are easy to differentiate. The male voices employed a lower, gravelly tone that was believable. She enunciates well, reads at the right speed and is pleasant to listen to. But it's the pauses and inflections that really make her one reader I love to listen to. Hear for yourself - here's an audio excerpt of Pretty Little Wife.
I enjoyed this book, but Kane lost a star as later revelations seem tawdry and a bit over the top. (Gentle readers, this is a good time to mention there are some triggers in this plot) But overall it was a good listen as I quilted away on some snowy days.
Posted by Luanne at 9:00 AM

I love these type of mysteries as well. Something about not knowing what goes on behind closed doors that give it a more hair-raising vibe!

You're right Joyousreads - the possibilities are many!

I've got this one on my list to listen to too!

Yay! I look forward to your thoughts Ethan.