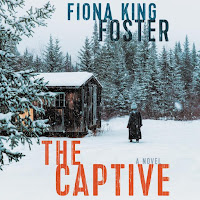 The Captive is Fiona King Foster's debut novel.
Sometime in the near future, one state has decided to secede from the union. (An idea that has been bandied about by more than one state in the US.)
Brooke Holland, her husband, Milo, and their their two daughters make their home on a farm in that seceded state. They've carved out a life that sustains them. "Poor but free." And for fifteen years, Brooke has steered clear of revealing her past to Milo - until the day Stephen Cawley shows up at the farm. The Hollands and Cawleys have had a blood feud for generations. (I immediately thought Hatfields and McCoys.) There's a bounty on Cawley's head and Brooke sees it as a way to deliver him to the Federal Marshalls, collect the bounty and keep her family safe. That's the idea anyway, but the best laid plans.....
I liked the idea of the rebel state, imagining what that would look like. King Foster's setting is a throwback to rural history and suits the story being told. The juxtaposition of  old and new, then and now, rural vs city, provides a great backdrop for a inevitable reckoning. In more than one way for Brooke.
Her past is slowly revealed in memories and gives the listener a better idea of who and why she has chosen to disappear down a remote country road. While there are plenty of action and tense situations, The Captive is a character driven novel, with Brooke at the helm. Mothers, daughters, families, love, loyalty loss and more all figure into King Foster's novel.
I'm not sure how I felt about Brooke. I applauded her loyalty to her husband and daughters, but the time for revealing the why of what they're doing came and left more than once. A lot of what happened could have been resolved by speaking the truth. And it made me a little frustrated with her. But, on the flip side, she believes she is protecting them. Milo, in fact, ended up being favorite character.
Without providing a spoiler, I did find one of the plot devices used in the final chapters out of sync with the tone of the journey there. But all in all, The Captive was an enjoyable listen and a great introduction for a new writer.
I chose to listen to The Captive. The reader was Courtney Patterson. She has a lovely voice, pleasant to listen to and clear and easy to understand. She provided many easily identifiable voices for the characters. (Teenager Holly's was perfect!) She has lots of movement in her reading, matching the action of the plot and the emotion of the characters. I had expected Brooke's voice would be a bit 'rougher' given her past. But she grew into the character I had imagined. I do enjoy listening to books as I find I become more immersed in the story. And that was true with The Captive. Hear for yourself - listen to an excerpt of The Captive.
Posted by Luanne at 9:00 AM