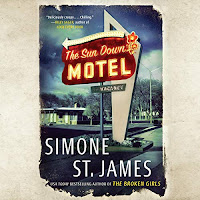 I've read nothing but great reviews of The Sun Down Motel by Simone St. James.
From Penguin Audio:
"Something hasn’t been right at the roadside Sun Down Motel for a very long time, and Carly Kirk is about to find out why in this chilling new novel from the New York Times bestselling and award-winning author of The Broken Girls.
Upstate New York, 1982. Viv Delaney wants to move to New York City, and to help pay for it she takes a job as the night clerk at the Sun Down Motel in Fell, New York. But something isnʼt right at the motel, something haunting and scary.
Upstate New York, 2017. Carly Kirk has never been able to let go of the story of her aunt Viv, who mysteriously disappeared from the Sun Down before she was born. She decides to move to Fell and visit the motel, where she quickly learns that nothing has changed since 1982. And she soon finds herself ensnared in the same mysteries that claimed her aunt."
My Thoughts:
I had read so many glowing reviews of The Sun Down Motel. I managed to finally get my hands on an audio copy and ..... wow! What a fantastic listen!
St. James successfully blends a mystery together with the supernatural. Now, I'm not a big supernatural reader, but this pairing is just so very, very right for this story. The supernatural aspects were simple, but frightening. The mystery is in the death of four women in Fell, New York. It was unique to have the case being investigated by two amateurs thirty five years apart. The reader is privy to both narrative and knows more than either Viv or Carly. The search for answers is so really well written from an investigative point of view. The two leads are well drawn and I was happy to drawn into their obsessive search for answers. But I don't know if I would go back to that motel night after night...
I've said it before and I'll say it again. I become so much more immersed in a story when I listen. And this book was fantastic in audio format. The Sun Down Motel is told back and forth in a past and present narrative. Two readers - Brittany Pressley and Kirsten Potter  - were used to tell this story and that was a good decision. They're both award winning readers that I've enjoyed in the past. With two voices, it was easy to discern what time frame we were in and who was speaking. Within their time frame, both narrators employ unique voices for supporting characters. Each captures the danger, the fright, the fear and much more. I often listen when I can't get to sleep. And I have to say that the descriptions of the Sun Down Motel gave me goosebumps - more than once. Doors opening and closing on their own had me listening to every squeak of my old house. Five stars plus! Hear for yourself - listen to an audio excerpt.
Posted by Luanne at 9:00 AM

I've got this one on my Kindle, but I might see if I can check out the audio from the library as well. Have you read this author's previous book - The Broken Girls? It's good too.

The audio was fantastic Kay - as well as the story. I just checked out the audio of The Broken Girls from the library - glad to hear you liked it!

I loved this book! I usually do better if I read instead of listen to audio, but I bet this was great to listen to.

Dianna - it was really great to listen to! I am leaning more and more towards audiobooks.