A Time for Mercy - John Grisham 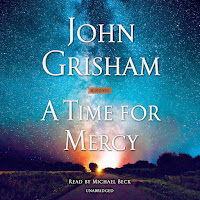 John Grisham's latest book is A Time For Mercy.
From Penguin Random House Audio:
"Clanton, Mississippi. 1990. Jake Brigance finds himself embroiled in a deeply divisive trial when the court appoints him attorney for Drew Gamble, a timid sixteen-year-old boy accused of murdering a local deputy. Many in Clanton want a swift trial and the death penalty, but Brigance digs in and discovers that there is more to the story than meets the eye. Jake’s fierce commitment to saving Drew from the gas chamber puts his career, his financial security, and the safety of his family on the line.
In what may be the most personal and accomplished legal thriller of John Grisham’s storied career, we deepen our acquaintance with the iconic Southern town of Clanton and the vivid cast of characters that so many readers know and cherish. The result is a richly rewarding novel that is both timely and timeless, full of wit, drama, and—most of all—heart.
Bursting with all the courthouse scheming, small-town intrigue, and stunning plot twists that have become the hallmarks of the master of the legal thriller, A Time for Mercy is John Grisham’s most powerful courtroom drama yet. There is a time to kill and a time for justice. Now comes A Time for Mercy."
My Thoughts:
I was thrilled to see that this latest Grisham was a legal thriller. Grisham is a talented writer across the board, but his legal tales are my favorite. And this latest may well be the best of them! The plot is gripping and the execution is simply fantastic. The behind the scenes machination of a trial are fascinating. As is the actual trial. Grisham's own background as a lawyer adds so much to his books. Jake is a great lead and the supporting cast brings back supporting characters from the previous two books. Time and place are brought to life with detailed descriptions. And then there's the loaded question - is murder ever justified?
I chose to listen to A Time for Mercy. The reader was Michael Beck and his narration was perfect for this title. He has created many Southern accents/drawls for the myriad cast of players. Each is just a little bit different and it's easy to know who is speaking. He also does the female/child voices very well. His interpretation of the book is simply wonderful. Beck uses his voice to wonderful effect, capturing the emotions of the characters and the action of the plot. I've said it before and I'll say it again - I become so much more immersed in a story by listening. Five stars plus for this one! I hope we see more of Jake. Hear for yourself - listen to an audio excerpt of A Time For Mercy.
Posted by Luanne at 8:00 AM

I'm planning on reading this one early next year. Our mystery group is doing the Jake Brigance series (read any or all of them) for March. I plan on rereading the first two and then reading this one and also plan to maybe do a read/listen of this one. Yes, I agree with your thoughts on audios. For some books, the audio is so vivid. Glad it worked well for you. Hope you and your family will have a joyful and peaceful holiday season, Luanne!

I agree that Grisham is at his best in a legal thriller! I've only read A Time To Kill, so I'll need to read both of the followups!

Kay - a great choice for a book club - there will be lots of discussion points for sure. I hope you enjoy this latest. And the best to you and your family Kay - stay safe.

Ethan - this one is the best of the three IMO. Def worth reading - or listening!

Not read a Grisham for simply ages. This sounds a good one and thank you for the review.

Mystica - it's worth picking this one up!