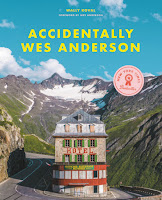 I've always been an armchair traveller - even more so now with the appearance of Covid. I love 'visiting' out of the way, off the beaten track and unusual locations and attractions etc. The newly released Accidentally Wes Anderson by Wally Koval is a compilation of those.
Now, you may be wondering about the title. Accidentally Wes Anderson began as as a travel bucket list for Koval and his wife. Specifically places that embodied the style of filmmaker Wes Anderson. As they started to document their travels, others started weighing in with their own pictures. Things grew and there are now over one million Adventurers seeking out and sharing locations on Accidentally Wes Anderson (AWA)
The real Wes Anderson provides a forward. The book is divided into nine chapters that circle the globe. Each entry has a full color photograph, location and year and a detailed entry on the place. This is one of those coffee table kind of books that if you leave out, people will inevitably pick and peruse. Normally I would have done that, but I decided to travel along with the layout starting with North America.
The pictures are what first catch your eye, the stark simplicity, the colors, the almost 'otherworldliness' of them. Set into a single shot, they almost feel not real and do indeed bring Anderson's films to mind. Think 'The Grand Budapest Hotel.' And then there's the story about the location. This for me, was absolutely fascinating.
A favorite? I can't pick one but the striped bungalows in Portugal, launderettes in England, a viewfinder in Iceland, fishing huts in Canada, typewriters in New York were a few of them. There are many, many more and each is just as wonderful
Fans of Atlas Obscura will love this book. And it would make a great gift. Accidentally Wes Anderson is a unique and captivating look at jewels out in plain sight - if you only knew where - and how - to look.
Posted by Luanne at 8:00 AM