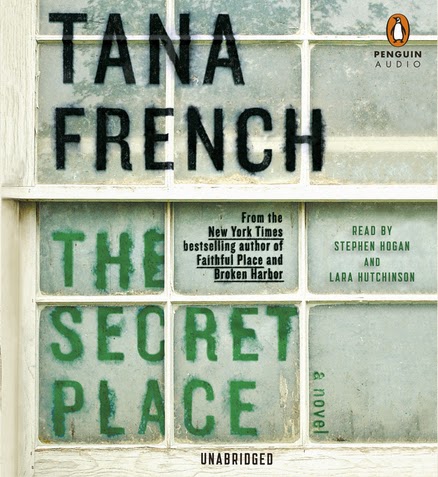 Tana French is one of those authors I'm aware of, but haven't managed to read yet. I recently picked up the audio version of her latest - The Secret Place - to keep me company on the drive back and forth to work. This is the fifth book in the Dublin Murder Squad series.

Chris Harper was found murdered a year ago in a secluded grove on the grounds of St. Kilda's boarding school. The case is still open with no new leads.....until a card with a photo of the dead boy is found on the school's 'secrets board'. It's enough to reignite the investigation.

The book takes place over the course of a day as Detectives Stephen Moran and Antoinette Conway re-interview the students.

I quite like the two detectives and would be interested in reading more of this pair. What had me somewhat bored was the repetitiveness of the girls' conversations. You can only listen to so many OMG's, Hellloooo's, Excuse me's and more. Yes I believe it's quite true to teenage conversation, but in audio format it just started to grate. And I found myself tuning out and thinking of throwing in the towel on this one. Then French threw in a bit of a different element - otherworldly if you will. Intrigued again, I kept listening.

French is a good writer and some of her turns of phrase and descriptive phrases are really well done. Nuance and intuition are a large part of Moran's personality and investigative style. These nebulous concepts are given concrete descriptors that really painted vivid images and settings. The exploration of cliques and the world of teenagers is vividly portrayed. French paints a frightening 'mean girl.'

The book is quite long - at 464 pages, I think it could have been pared down a little. Much of the narrative seemed to repeat itself  with the clues as to who the killer is (very) slowly doled out. I kept listening as I really wanted to know which girl was the culprit And the answer is there, but the actual ending was a bit confusing - I had to go back and listen a few times. And at the end, I really wondered why the supernatural element was included. It would have been a good book without it.

There were two readers - Stephen Hogan and Lara Hutchinson. Both are Irish actors, so the accents are real. Hogan embodies the mental image I had created for this character. Hutchinson captures the toughness of Conway. Both narrators read the voices of the teenage girls and caught the sarcasm, the anger and the nastiness of them.

On reading other's reviews, I'm seeing the recommendation to not start with this book if you're new to Tana French, that it is decidedly different  from other books in the series. Fair enough - I'll try the next book French releases. (I'm one of those readers who can't won't go backwards in a series)

You don't sound impressed. If you had read her other books, particularly BROKEN HARBOR and FAITHFUL PLACE,your review would be different because you would love this series of books and you would love Tana French.

No one writes dialog like Tana French. For that reason, combined with her unpredictable twists and turns, all her books are difficult to put down, the kind you keep reading long past bedtime.

I admit, sometimes the flashbacks in this story seem silly and implausible. This is especially true when the girls claim to see the murder victim's ghost. The ghost is even used by the detectives to deal with one of the girls. Come on, these are teenagers, not 6-year-olds!

But if you just go with it and accept the girls' immaturity and dirty mouths, this book is another winner for Tana French and her Dublin murder squad series. She's one author who is so predictably good that it's always safe to preorder her books.

I know tons of people who love her work. I have a few of her older books here and hope to give them a go one of these days.

Tana French is my favorite mystery writer. I' ve only read her first 3 books because if I read them too fast then i'll have caught up to her & the wait for her next book would be agonizing.
I know that you hate going back in a series but I think that this one is well worth exploring her earlier books, such as The Likeness which introduces Frank's character.