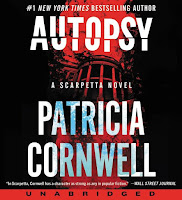 I read Patricia Cornwell's first Kay Scarpetta novel back in 1990 and was immediately hooked on the premise, characters and plotting. Fast forward to 2021. The 25th entry in this series, Autopsy, has just released.
Now, I must admit, somewhere around the 20th book, I threw the towel on this series. The books seemed mired in extraneous detail and became repetitive. But...this blurb from the publisher had me more than a little curious....
"In this relaunch of the electrifying, landmark #1 bestselling thriller series, chief medical examiner Dr. Kay Scarpetta hunts those responsible for two wildly divergent and chilling murders. Forensic pathologist Kay Scarpetta has come almost full circle, returning to Virginia as the chief medical examiner, the state where she launched her storied career."
And you know what? I really enjoyed it and am back on board with this series.
The same cast of characters is present, Kay, her Secret Service forensic psychologist husband Benton, her niece Lucy and my personal favorite - Pete Marino. The relationship between Kay and Marino was contentious in the beginning of the series, but I'm happy with where Cornwell has taken Marino in this latest. He's a valuable resource instead of being portrayed as a thorn in her side. However there is a new thorn in the side character. Kay has inherited a secretary who is loyal to her old boss and quite resentful of Kay. Kay has the same analytical mind. Cornwell keeps the characters moving forward in real time, with the successes and sadness that living life brings.
The 'back to basics' has Kay investigating the death of a young woman found on the railroad tracks. This crime very much reminded me of the earlier books. Political machinations and corruption abounds at a number of levels in this latest, stretching as far as outer space! Kay is called in to examine a remote site. There's yet another thread that I'll let you discover.
I chose to listen to this latest. The reader was award winning narrator Susan Ericksen. She has read previous Scarpetta books, so the continuity is nice. Her voice is perfect for the mental image I've created for Scarpetta. Her diction is clear, easy to understand, well enunciated and pleasant. The speed of speaking was a bit slow for me, so I sped things up two notches, using the speed adjuster on my device. She provides different voices for the characters, each easily identifiable. Ericksen conveys the emotions of the characters and the action and suspense of the plot with her voice. A great performance. Hear for yourself - listen to an excerpt of Autopsy.
I did find the ending a bit rushed and a slightly too pat, but I quite enjoyed this 'relaunch' of this series. The door has been left open for number 26 - and I for one will be picking it up.
Posted by Luanne at 7:00 AM

I agree with you. This was easily the best Scarpetta novel in years, even if the ending was so abrupt. I will have no problems with her writing another if she chooses to.

Me too Ethan! I think the way things were left, there will be another book.