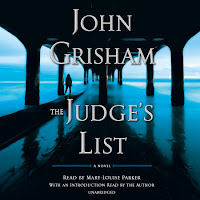 John Grisham brings back Investigator Lucy Stolz in his newest release, The Judge's List.
Lucy works for the Florida Board on Judicial Conduct, investigating complaints involving judges. A woman who hides behind a number of aliases brings a case to Lucy's attention regarding a sitting judge and some heinous crimes. Jeri has been looking into this judge for over twenty years. She is terrified of the man and wants Lucy to take it from there.
What a neat concept. I had no idea there was such an overseer of judicial conduct - but there is. Who better than John Grisham to write about a legal process?
You'll be astounded at the perpetrator's motives and methods and fascinated with how he has covered his track for so many years. Quite chilling. Jeri was difficult to like for me - she's pushy, single minded and at first I thought she was overreacting with her precautions. (She's not) I liked Lucy in The Whistler and was quite happy to see her in another book. Her team is an eclectic bunch and add to the story.
Though mostly told through Lucy's viewpoint, Jeri and the judge also have chapters of their own.
We do know who the culprit is, but it's the race to capture him before he commits additional crimes that is the story. I'm not sure if I was 100% on board with the judge's actions at the end, but I quite enjoyed the journey. And I'd be very happy to see Lucy again.
I chose to listen to The Judge's List. Grisham has an author's note in the beginning and it's a nice opener to the book. The narrator was Mary-Louise Parker. She speaks clearly, is easy to understand. Her speaking speed is at measured pace. The voices for Lucy and Jeri are very similar and you'll have to keep track of who is speaking. A great tale and a good listen. Hear for yourself - listen to an excerpt The Judge's List.
Posted by Luanne at 9:00 AM