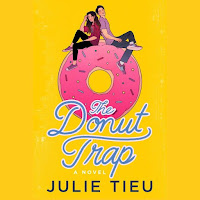 Are you looking for your next listen? Julie Tieu's debut novel, The Donut Trap, is it's a sweet choice - in more ways  than one!
It was this descriptor from Harper Audio and Avon Books that caught my eye..."Julie Tieu sparkles in this debut romantic comedy, which is charmingly reminiscent of the TV show Kim’s Convenience..." I love that show and just knew I would enjoy The Donut Trap.
Tieu gives us an eminently likable protagonist in Jasmine Tran. She's finished college and just doesn't know what's next for herself. Until she's figured things out she works in the family business - Sunshine Donuts. And tries to fend off her mother's attempts to find her a husband.
And then Jasmine meets Alex - or should I say re-meets? The burgeoning relationship between the two is well written although it did feel a bit accelerated to me. Now here's where that Kim's Convenience comparison comes in. Both Alex and Jasmine are first generation immigrant children. The respect given to their parents, their values and their culture is there, but so is the desire to step outside the expectations put on them. This is an important part of The Donut Trap and I think Tieu's exploration of this rings very true. It's also a coming of age for Jasmine as she finally sets her own goals, desires and path. This thread does seem to take precedence over the romantic plot line.
The other thing that needs to be addressed is - donuts! Oh my gosh, I had some serious donut craving while listening to the descriptions!
I chose to listen to The Donut Trap. The reader was Natalie Naudus. She was a great choice. Naudus's voice is pleasant, easy on the ears, well paced and she enunciates well. The voice for Jasmine matched the age of the character and the mental image I had created. There's lots of internal dialogue for Jasmine and the slightly sardonic tone used was just right as well. She does a great job with the male voices as well, deepening her tone to a believable level. Alex's voice has a nice gravely tenor to it that really works for the character. Naudus also reads the part of  all the parents with accurate and convincing accents. Jasmine's best friend is Linh and her voice is bouncy and upbeat. Naudus captures the dynamics, happenings, thoughts and emotions of the plot with her interpretation of Tieu's work. A great performance and a narrator I would definitely enjoy again. Hear for yourself - listen to an audio excerpt of The Donut Trap.
I enjoyed all aspects of The Donut Trap. I'm looking forward to Tieu's next book, Circling Back to You, due out in summer 2022.
Posted by Luanne at 9:00 AM

Preordered on Audible - thanks!

Hi Amy - thanks for reading! I hope you enjoy it!

A romantic comedy is just what is needed at these times. Thanks for the review.

That's the truth Mystica! I love 'getting away from it all" in a good audiobook.