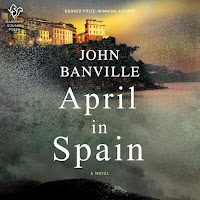 I listened to award winning author John Banville's last novel, Snow, and really enjoyed it. Banville's newest novel is April in Spain. Banville writes a number of series. One is the Quirke books - he's a Dublin pathologist. Detective Inspector St. John Strafford was introduced in Snow and makes a return appearance here.
Quirke and his wife Evelyn are on vacation in Spain when a small accident sends him to hospital. It is there that he sees a young woman that has been declared dead for many years. It can't be her - could it? His daughter was friends with April Latimer as a teen. Quirke calls her and a chain reaction is set in motion. Strafford is sent to Spain and there's one more on the way as well - a hit man has been given a job in Spain...
Now, I chose to listen to April in Spain. Banville's characterizations are complex, detailed and nuanced. I found that listening to the book drew me deeper into the characters' mindsets, thoughts, deductions, plans, backgrounds and more. The level of introspection of each character makes for fascinating listening.
Banville weaves Irish history, background and politics into his plotting. For me, the 'is it her' mystery took a backseat to the characters themselves. The answer to that question is up in the air until the final chapters. Some may find this unhurried mystery a bit of a slow burner, but I very much enjoyed it. Banville is a talented wordsmith.
I liked the reader of Snow and was quite happy to find that John Lee was also the narrator for April in Spain. He has a wonderful Irish accent that I loved - lilting, broad, rising and falling within a sentence. Lee's voice is so very expressive. He captures the characters perfectly and the voices used matched the personality and mannerisms of the players. Hear for yourself - listen to an excerpt of April in Spain.
Posted by Luanne at 9:00 AM