The Lies You Told by Harriet Tyce 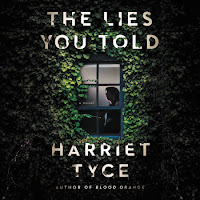 The Lies You Told is Harriet Tyce's latest book.

What's it about? From Grand Central Publishing:
"In the playground it’s the law of the jungle
But at the school gate, there are no rules at all…
When Sadie Roper moves back to London, she’s determined to pick up the pieces of her shattered life. First, she needs to get her daughter settled into a new school-one of the most exclusive in the city. Next, she’s going to get back the high-flying criminal barrister career she sacrificed for marriage ten years earlier. But nothing goes quite as planned. The school is not very welcoming newcomers, her daughter hasn’t made any friends yet and the other mothers are as fiercely competitive as their children. Sadie immediately finds herself on the outside as she navigates the fraught politics of the school gate.
But the tide starts to turn as Sadie begins to work on a scandalous, high-profile case that’s the perfect opportunity to prove herself again, even though a dangerous flirtation threatens to cloud her professional judgment. And when Julia, queen of the school moms, befriends Sadie, she draws her into the heart of the world from which she was previously excluded. Soon Sadie and her family start to thrive, but does this close new friendship prevent her from seeing the truth? Sadie may be keeping her friends close, but what she doesn’t know is that her enemies are closer still…
Dark, addictive and compelling, The Lies You Told is a compulsive psychological thriller from a master storyteller."
My Thoughts:
There's one in every organization, school, workplace and more. A bully. I do find them hard to read. And Tyce has  truly created a horrid bully in Julia. She's head of the PTA and most of the other school gate parents are her sycophants. The children's behavior is also influenced, and Sadie's daughter Robin is treated shamefully at the prestigious school. Why not leave the school? Press for change? Well, Sadie has come back to her home town and is living in her deceased mother's home. Their relationship was fractious and to own the home and fulfill the will, Robin must attend the school. Hmmm..... a bit of a stretch for me. Sadie has also left her marriage. Okay, that fits, but he makes an appearance later on that was again a bit of a stretch for me.
I had read Tyce's debut novel Blood Orange, and my main problem was with the protagonist. I do like Sadie better, but still have issues with her choices. As in the previous book, Sadie is a barrister, one trying to get back into chambers after many years. I grew quite irritated with her when she made some questionable choices.
I don't doubt the bullying part of the plot - I can absolutely imagine it. But, the cruelty shown to both her and her daughter in the beginning doesn't seem to ring any alarm bells and again, I questioned Sadie's subsequent choices. I have to mention here that I think Robin was the character I enjoyed the most - and she seems to be the only well adjusted character.
There's a lot happening in The Lies You Told - a bit too much in my opinion. The court case, disappearing and reappearing husband and the dead, evil mother was overload. The bullying plot line was enough. Tyce comes up with a action filled run to the final pages and a nice little twist at the end. The Lies You Told was just okay for this listener.
I did choose to listen to The Lies You Told. The reader was Sarah Durham. She has a lovely voice, pleasant to listen to and well enunciated. She speaks with a British accents that is easy to understand. She uses different voices - Julia's is particularly well done. Hear for yourself - listen to an excerpt of The Lies You Told.
Posted by Luanne at 9:00 AM

This does sound like it would be a bit tough to read, just based purely on the subject matter.

Yeah, the bullying was tough to read...