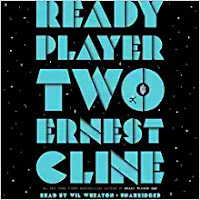 I read Ernest Cline's debut novel, Ready Player One, back in 2011. The sequel is finally here - Ready Player Two. My thoughts can be found after the description of the title from Random House Audio:
"Days after winning OASIS founder James Halliday’s contest, Wade Watts makes a discovery that changes everything. Hidden within Halliday’s vaults, waiting for his heir to find, lies a technological advancement that will once again change the world and make the OASIS a thousand times more wondrous—and addictive—than even Wade dreamed possible.
With it comes a new riddle, and a new quest—a last Easter egg from Halliday, hinting at a mysterious prize. And an unexpected, impossibly powerful, and dangerous new rival awaits, one who’ll kill millions to get what he wants. Wade’s life and the future of the OASIS are again at stake, but this time the fate of humanity also hangs in the balance."
My Thoughts:
I loved the first book and was quite happy to see there was at last a follow up to the adventures of the High Five. Ready Player Two again has Wade and his friends on one more epic quest - one to save millions of lives from - of course - a nefarious entity. Good vs. Evil. David vs. Goliath. Cline has the reader/listener firmly on the side of the underdogs. Can they reprise their first victory?
The Player books draw heavily on '80's references - Pac Man, Monty Python and the Holy Grail, song lyrics, film scenes and a whole lot more - as these are the clues used to solve the puzzle. Now I absolutely 'got' almost every reference and could picture the film scenes easily. Younger listeners may not relate to some of the references. Or they may now be chasing down some classic films and tunes!
I liked Wade as a lead in the first book and he still appealed to me in this second book. Cline gives him some weaknesses and some life lessons in this book that make him human and give him a personality instead of just a game player.
That being said, Ready Player Two is all about the game, the clues, the chase and the run up to a final showdown. The book is action, action and more action!
I listened to this book and the reader was Wil Wheaton, a favourite of mine and the perfect choice for a narrator. He did the first book as well and the continuity was much appreciated. He has the most expressive voice! His tone suits Wade, is believable and totally suited the mental image I had conjured up for this character. (He did well with the other players as well.) He brings the book to life with staccato sentences, inflection that matches what's going on, (a nicely sardonic tone at times) and emotion that suits the plot.  He's easy to understand and enunciates well. Hear for yourself - here's an audio excerpt of Ready Player Two.
I wonder if there will be a movie made of this book as well? And if there might be a Ready Player Three in the future?
Posted by Luanne at 9:00 AM

I've been on the fence about reading this one, but I really trust your perspective on it. Adding to my list!

I was on the fence too Ethan. And the first one is def better. I like to mix things up, so it was a step out of my usual genres. The audio was a good fit for this one.